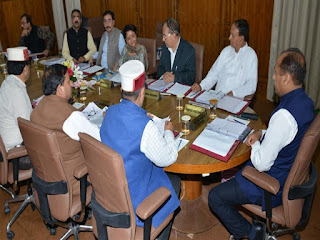 SHIMLA---The Cabinet decided to convert 1026 class-IV posts of different categories in Irrigation and Public Health Department into Pump Attendants and appoint the eligible water guards against these posts as per R& P Rules on contract basis.

The Cabinet gave its approval to enhance the financial assistance to the family members of the working journalists in case of death from existing rupees two lakh to rupees four lakh and for retired journalists from Rs. 50,000 to rupees one lakh under the 'Patrakar Kalyan Yojna'.

It decided to enhance the subsidy being provided to forest guards posted in 200 very sensitive beats for purchase of weapons from existing Rs. 12000 to maximum Rs. 15000.

The Cabinet gave its approval to create four posts of record keepers, one each in newly opened Additional District and Session Court, Nalagarh, Civil Courts, Banjar, Tissa and Shillai.

The Cabinet gave its approval in principle to establish one Additional District and Sessions Court at Sundernagar in Mandi district and one Civil Court at Jaisinghpur in Kangra district.

It gave its nod to purchase 79 motor cycles, 25 light vehicles, 7 mini buses, one big bus and two trucks in Police Department for its effective functioning.

The Cabinet gave its approval to fill up five posts of Civil Judges in Himachal Pradesh High Court through direct recruitment.

In order to generate sustainable livelihood opportunities in farming sector for unemployed youth of the State, the Cabinet decided to launch Mukhya Mantri Khumb Vikas Yojna in the State and rename it as Himachal Khumb Vikas Yojna.  Under this scheme assistance would be provided to all categories of farmers registered with department for adopting mushroom cultivation.

The Cabinet decided to allot 40 MW Baggi Hydro Power House in favour of Bhakra Beas Management Board for its execution.

It decided  that henceforth ex-servicemen may be deployed at 12 RTO barriers in Transport Department  instead of Home Guards to ensure better employment opportunities to the ex-servicemen.

It also decided to upgrade Government Primary School, Kuklah in Mandi district to government middle school along with creation and filling up of requisite posts.

The Cabinet decided to increase the discretionary fund of MLAs from existing Rs. 7 lakh to Rs. 8 lakh per year to fulfil the expectations and aspirations of the people.