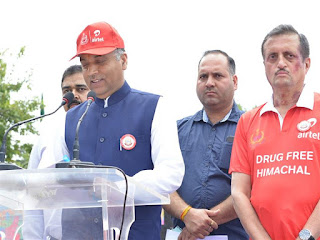 SHIMLA----The state government was committed to make Himachal Pradesh a drug free state by ensuring effective enforcement of laws to check this menace, besides ensuring people's participation for making it a mass movement. This was stated by the Chief Minister Jai Ram Thakur while addressing the gathering on the occasion of prize distribution function of the 9th Himachal Pradesh Police and Airtel Half Marathon-2019 held here today.

The Chief Minister launched 'Student Police Cadet Programme' on the occasion. The programme envisages inculcating respect for the laws, practice discipline and civic sense, and develop empathy for vulnerable sections of the society.

He also launched Mobile App on 'Drug Free Himachal' and 'Nasha Nivaran Toll Free Helpline-1908'. He also launched 'Cyber Crime Police Station' on the occasion. He said that anyone can register complaint against drug peddler through this App.

The Chief Minister said that the state government was determined to curb the problem of drug abuse in the state. Drug abuse continues to be a serious social problem across the state and country as lives of thousands of people were destroyed by their dependence on drugs, he said.

Jai Ram Thakur said that major part of the anti-drug strategy of the state government focuses on certain drugs originally derived from plant sources such as cannabis and opium. The state government has taken stringent steps against cultivation and eradication of these drugs generating plants in the state.

The Chief Minister said that on the initiative of the state government, meeting of Chief Ministers of neighbouring states was held last year to chalk out joint strategy to check the social evil of drug abuse. He also appealed to the parents to keep an eye on behavioural change of their children and stresses NGOs and Panchayati Raj Institutions to play greater role in controlling this social vice.

Jai Ram Thakur said that the state government was not only determined to eradicate the production of drugs but is also working towards providing a helping hand to drug abused. He said that several drug de-addiction centres have been opened in the state and were being manned by professional people.

He also administered oath to the students regarding 'Student Police Cadet Programme'.

Director General of Police S.R. Mardi welcomed the Chief Minister and other dignitaries present on the occasion. He also highlighted the salient features of the event.