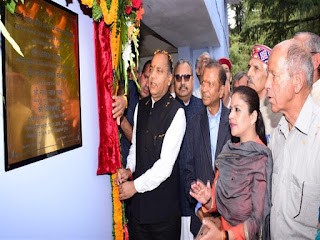 SHIMLA----                    Inculcation of moral values is the need of the hour for which the teachers, educational institutions and society in general should come forward so that the ancient Indian system of education could be revived.

This was stated by the Chief Minister Jai Ram Thakur while addressing the gathering after inaugurating Thakur Ram Singh hostel building of Saraswati Vidya Mandir, Vikasnagar, here today. The building has been constructed by spending an amount of Rs 5.20 crore out of which, Rs 2.34 crore have been contributed by Satluj Jal Vidyut Nigam Limited (SJVNL).

The Chief Minister said that the main objective of the education was to build a strong and vibrant society with high moral values thereby helping in making the students responsible citizens of the country.

He said that Vidya Bharti was not only helping in providing quality education to the students, but also providing  an education system which is interlinked with our cultural heritage on one hand and economic and scientific development on the other. He said that education was the only viable medium to take the nation successfully ahead towards 21st century.

The Chief Minister said that the state government has made a provision of Rs. 7598 crore for the current financial year to providing quality education to the students in the State. Atal Adarsh Vidya Kendra Yojna has been launched under which 15 new Atal Adarsh Vidya Kendra would be established in the State during the current financial year so that students could get boarding and lodging facility within the schools besides quality education.