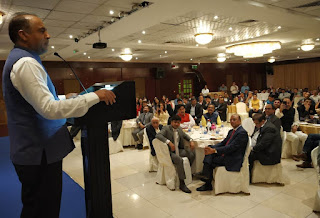 SHIMLA-----    Chief Minister Jai Ram Thakur while addressing the members of Himachali Community at Dubai during his maiden visit to United Arab Emirate (UAE) yesterday evening said that the people of Himachal due to their hard work and honest nature has created a special place for themselves where ever they go in the world.

The Chief Minister said that the Himachali diaspora has made a special contribution in development of UAE. Himachali people have not only created a place for themselves in business world but also had made an immense contribution in fields like medicine and engineering.

Jai Ram Thakur appealed to the people of Himachal living in UAE to come forward and contribute towards development of Himachal Pradesh.

Consulate General of India in Dubai Vipul welcomed the Chief Minister and highlighted the contributions of Himachali in development of Dubai.

The India Club, where this event was organized, was opened in 1964.