A Guard of Honour was presented to Hon’ble Mr. Justice V. Ramasubramanian 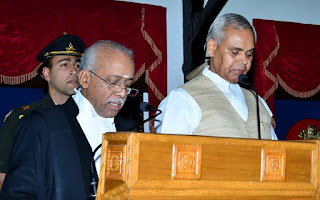 Born on June 30, 1958, Justice Ramasubramanian did his B.Sc. from Vivekananda College in Chennai. He was enrolled as an Advocate on 16th February, 1983 and practised for almost 23 years in Madras high Court, City Civil and Small Causes Courts, State Consumer Commission and District Consumer Fora, Central and State Administrative Tribunals in Chennai. He was appointed as an Additional Judge of the Madras High Court on July 31, 2006 and as permanent Judge on November 9, 2009. He was transferred to Telangana & Andra Pradesh High Court on April 27, 2016. Prior to being elevated as Chief Justice of High Court of Himachal Pradesh, he was Judge in Telangana High Court.