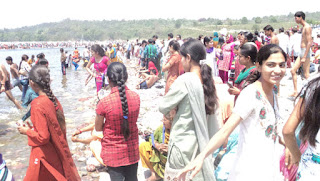 JAWALAMUKHI, ---Baisakhi, heralding commencement of wheat harvesting, was celebrated Sunday with traditional enthusiasm and religious fervor throughout the Kangra district with traditional gaiety and
religious fervor .
Thousands of people took a holy dip in the Beas river on the occasion
of Baisakhi on sunday. People flocked Kaleshwar in Dehra sub divison
of Kangra District to take holy dip in the holy panjtirthi Tank and
Beas river.They also visited the Kaleshwar temple of lord shiva. This
temple is sbout 500 year old in the meeting place of Beas river and Kunah Khad.

According to ancient legend this temple was constructed by the Pandvas with the help of Vihva Karma in the night during their secret exile. But the construction of the temple was abdoned by the Pandvas. it was a condition during their exile that they should not be spotted seen during the day. therefore, they decided to construct the
holy city by night. When they had barely constructed two steps, an old
woman who lived nearby woke up. it was perhaps an overcast moonlight night. The old woman mistaenly thought that dawn had arrived. After finishing her ablutions,she began to grind wheat.On hearing the sound
of the grinding stone, the Pandvas, too, thought that the night was
over. To avoid being detected, they left the place in a hurry, leaving
the city in complete. Later on, the temple was contructed by the king
of Katoch dynasty. this pilgrimage place is considered as sacred as
Haridwar. The people who are unable to visit Haridwar,immerse the mortal remains of their relatives, in the sacred water of this place.
In Jawalamikhi, devotees were seen at famous shrine of Jawalamukhi.The devotees started queing up here since early morning and waited for hours to pay obeisance. Simmilarly,devotees thronged at various temples of the area to performed puja.