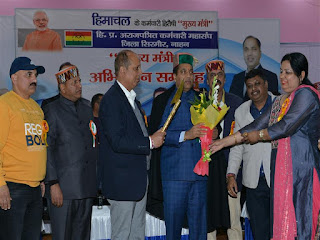 SHIMLA-----The employees are the backbone of any government as they play an important role in effective implementation and dissemination of policies and programmes. This was stated by the Chief Minister Jai Ram Thakur while addressing the 'Abhinandan Samaroh' organized by Himachal Pradesh Non-Gazetted Officers Association, Sirmour district at Nahan today.

Jai Ram Thakur said that the state government has always maintained cordial relation with its employees and has ensured that they get best treatment. He said that it becomes duty of the government and the employees to work collectively for betterment of the State so that Himachal emerges as the most developed State of the Country.

He said that the state government has announced to enhance the government contribution under the New Pension Scheme from existing 10 percent to 14 percent in this year's budget. This decision would benefit over 80,000 New Pension Employees of the State.

He announced Rs. 10 lakh for the building of NGO, District Sirmour at Nahan.

The Chief Minister was honoured by various employees Associations on the occasion.

Speaker, Vidhan Sabha Dr. Rajiv Bindal said that the present state government was employees friendly and has provided several relief and financial benefits to them.