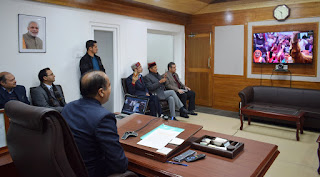 While addressing the people of Jhandutta through video conferencing from Oak Over, Shimla Chief Minister said that after completion of this  ambitious  Rs. 77.52 crore Panol-Jhandutta-Nand Nagraon-Jejwin road including bridge at Nand-Nagraon-Chhajoti under CRF foundation stone of which was laid by him today would go a long way in ensuring better road connectivity to the people of the Kotdhar and Jhandutta areas.

Chief Minister said that the foundation stone of Rs. 10.09 crore Science Block for the Degree College, Jhandutta was another major milestone for the area in education sector. He said that the State Government has also approved a Rs. 48 crore water augmentation scheme under BRICS which would provide improved water supply to over 20 panchayats of the area.

While congratulating the women folk on the occasion of International Women Day, Chief Minister said that the State Government was committed for empowerment of women by ensuring their active participation in every sphere of development and decision making.

MP Anurag Thakur was also present on the occasion at Jhandutta during the video conferencing.