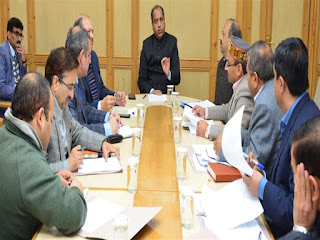 Shimla-----The people must be sensitized about the symptoms, cause and treatment of swine flu so that immediate and timely treatment could provide to the patient. This was stated by the Chief Minister Jai Ram Thakur while presiding over the meeting to ensure effective steps to monitor and take curative steps to ensure that the cases of Swine flu are curbed in the State.

Chief Minister directed the officers that the people must be sensitized about the symptoms and preventive measures to be taken to avoid spread of this disease. He said that the department must sensitize the public by optimum use of print and electronic media. He said that complete analysis of positive cases must be done so that preventive measures could be taken to check spread of disease. He said that special medical teams must be deployed in those areas where maximum number of cases have been reported.

Chief Minister said that the State Government was sensitive enough towards not only with regard to the availability of medicines, but also strengthening the infrastructure as well. He said that isolation ward with 12 beds facility has been formed in IGMC Shimla and one more ICU of four beds facilities has been added to the existing infrastructure so that this disease can be managed effectively. He said that despite of the decline in the incidents of Swine Flu, the State Government has prepared itself with advanced stock of 8000 capsules in IGMC Shimla to meet out any untoward impact of swine flu outbreak.

Jai Ram Thakur said that adequate stock of medicines must be ensured so that immediate treatment could be provided to the patients. He said that special focus must be laid on those areas from where maximum cases of the H1N1 infection have been reported.

Chief Minister said that steps must to take to provide immunity drugs of the family members of the affected patient, to check further spread of the diseases.

It was informed in the meeting that as many as 270 tests were done in the State for swine flu, out of which 86 were found positive.