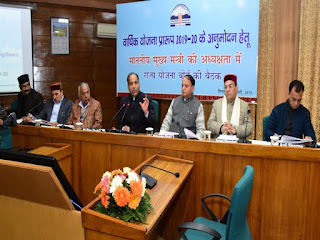 SHIMLA----The annual plan size of Rs. 7100 crore for the year 2019-20 was approved in the meeting of State Planning Board held here today under the chairmanship of Chief Minister Jai Ram Thakur, with an increase of Rs. 800 crore from the last year's annual plan of Rs. 6300 crore, thereby registering an increase of 12.70 percent.

The sectors which have been given added priority in the annual plan are social services sector, transport and communication, agriculture and allied activities, energy and irrigation and flood control etc.

The Chief Minister said that an outlay of Rs. 3048.15 crore has been proposed for social service sector which is 42.93 percent of the total outlay. The funds allocated for education and health sector would help in improving the human development indicators and making the growth process in the State more inclusive. He said that transport and communication sectors are being given the second priority with proposed outlay of Rs. 1241.98 crore, which is 14.49 per cent of the total outlay. He said that this has been done to link feasible villages with motorable roads and maintenance of the existing infrastructure.

The Chief Minister said that out of annual plan size of Rs. 7100 crore an outlay of Rs. 1788.49 crore has been provided for Scheduled Castes Sub Plan for the implementation of schemes largely benefiting scheduled caste population.  Similarly, 9 percent funds amounting to Rs. 639 crore have been provided under the Tribal Area Sub Plan which is aimed at development of the tribal areas of the State. He said that Rs. 80 crore has been allocated for backward area Sub Plan for development of the backward areas of the State.

He said that Rs.  735 crore have been proposed under Rural Infrastructure Development Fund (RIDF) loan funding from NABARD. Under this  a sum of Rs. 427  crore has  been proposed for roads and bridges, Rs. 143 crore for rural water supply schemes, Rs. 125 crore for minor irrigation schemes, Rs. 40 crore for soil conservation  and flood control etc.

Vice Chairman, State Planning Board Ramesh Dhawala said that this planning meeting was vital for achieving the desired developmental goals for the year 2019-20.

Additional Chief Secretary, Finance Anil Kumar Khachi said that all the initiatives made by the government for the year 2018-19 were being effectively implemented in the State. He said that the endeavour of the department was to ensure that the desired objectives were achieved in letter and spirit.

Secretary, Planning Akshay Sood gave a presentation on the occasion.