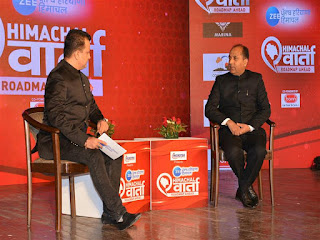 SHIMLA----Chief Minister Jai Ram Thakur said that successful implementation of Jan Manch is the biggest achievement of the state government during last one year which has been launched for effective redressal of public grievances at their door-steps. He was speaking while participating in the 'Himachal Varta-Roadmap Ahead' programme held here today.

The Chief Minister said that the Jan Manch has been appreciated even by political opponents as over 22,000 grievances of general public have been redressed during last one year which was a record in itself. He said that very first decision of the state government was aimed at welfare of the senior citizens by lowering the age limit for getting pension from 80 to 70 years, benefitting over 1.30 lakh persons. He said in order to have first hand information about the developmental needs and aspirations of the people of the state, he has visited 63 Assembly constituencies of the state out of total 68 during this short period of one year.

While replying to the question regarding better health services to the poor people  of the state, the Chief Minister said that the state government was committed to provide better health care facilities to the people at their door steps and it is being ensured that all citizens get access to good health care facilities and 'Himcare scheme' has been started for families who are not covered under Ayushman India or other medical reimbursement schemes.

He said that nature has blessed Himachal Pradesh with immense tourism potential and the government is committed for its optimum exploitation.  He said that 'Nai Rahein, Nai Manzilein' scheme has been launched to develop unexplored places of the state. He said that ADB projects worth Rs. 1900 crore tourism development have been approved for the state.

Jai Ram Thakur said that the Centre has approved developmental projects worth over Rs. 9500 crore which would go a long way in helping in accelerating pace of development in the state.

While replying to a question of unemployment, the Chief Minister said that was a universal problem and our state was no exception and to tackle this ticklish issue. He said that the state government  have started 'Mukhya Mantri Swavlamban Yojna' with an outlay of Rs. 80 crore to encourage youth to set up their self employment ventures for which capital subsidy up to 30 percent was being provided on plant and machinery up to an investment of Rs. 40 lakh.