It is vital to organise programme that instils spirit of unity among youth: CM 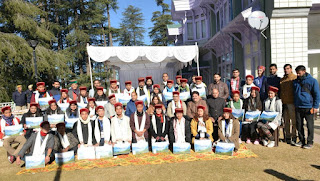 It is vital to organise programme that instils spirit of unity among youth: CM

SHIMLA------  In a nation with diverse culture like India, it was vital to organise programme that help in instilling the spirit of unity among the heart and mind of youth. This was stated by the Chief Minister Jai Ram Thakur while interacting with the ABVP students from North-Eastern States who are on visit to the Himachal Pradesh under the Student Experience in Inter State Living Programme here today.

While welcoming the students to the state, Chief Minister said that Students Experience in Interstate Living was initiative of ABVP, which aims at national integration and yields a sense of brotherhood among the people of the North-East region of India.

Jai Ram Thakur said that the North-East India also called as the' Land of Seven Sisters' due to the presence of seven states was a home to more than 166 tribes following different beliefs and cultural traditions. He said that the North-east region of the country truly represent the ethos of our great nation. Being a land locked hinterland, usually the students of the North-East region and their families experience a lack of exposure which gets fulfilled with this cultural exchange program.

The Chief Minister said that the students would have been able to get firsthand knowledge about the culture, food and heritage of the various states that they visit. Being a part of this tour gives the "feel" that even in diversity we are one in soul and heart, he added.

He urged the students to brace the ABVP organization more and more in their respective states and strengthen the unity and integrity of the country.

President Student Experience in Inter State Living Programme Atul Kulkarni said that SEIL by ABVP initiated 50 years back when a few students from Arunachal Pradesh came to Mumbai for their studies, and they were adopted by a local family to ensure that these students complete their studies before returning to their hometown.

As many as thirty one students from the seven northeast states are part of this tour, which includes 16 girls.