Haripur-Guler area will be developed for tourism: CM 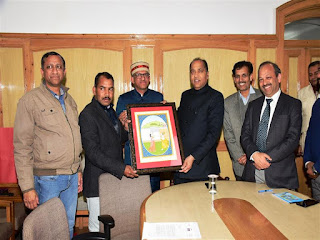 Haripur-Guler area will be developed for tourism: CM

Shimla----The State Government would ensure development of Haripur-Guler area of Kangra district from tourism point of view since the area has large number of historical monuments reminiscent of the erstwhile Guler state besides preserving and popularizing Guler painting. This was stated by Chief Minister Jai Ram Thakur while presiding over the presentation on 'Painting art history of world renowned Haripur-Guler' made by a delegation led by MLA Dehra  Hoshyar Singh.

The Chief Minister said that the area has several virgin locations which would be developed as tourist destinations by creating necessary infrastructure. He said that there were several historic temples in the entire town such as Kalyanrai, Goverdhandhary, Tararani temple or Ramchandra Temple which were national treasure owing to their unique craftsmanship and stone carving. He said that government may consider constituting Haripur-Guler Development Board on analogy of Renukaji Development Board for overall development of the area.

He said that world famous Pong dam was also situated here which is not only a bird watcher paradise but also an ideal place for water sports. He said that lakhs of birds from far off places like Siberia, Tibet, China and Mangolia migrate to Pong dam every year during the months of winter. He said that the State Government was contemplating a major plan to develop this area as a major tourist circuit.

Shri Jai Ram Thakur said that efforts would be made to start water sports activities such as rafting, boating, shikara, scuba diving etc. in Pong dam. He said that endeavours would also be made to restore old havelis, wells and water bodies to make them attraction for the tourists. He said that the place also has several major temples which would also be maintained and renovated from tourism point of view.

The Chief Minister said that the Haripur-Guler was birth place of world famous Kangra miniature paintings. The Nain Sukh of Guler was today the most renowned painter of miniature painting. He said that government would provide all possible help to preserve ancient art.

The Chief Minister was presented a painting by Dhani Ram, a famous miniature artist on the occasion.

MLA Dehra Hoshiyar Singh urged the Chief Minister to provide liberal assistance to develop the area from tourism point of view besides helping in conserving the Guler miniature paintings.