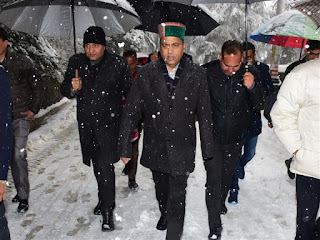 SHIMLA-----Chief Minister Jai Ram Thakur today took stock of situation arisen due to heavy snowfall in Shimla town and other parts of the State by undertaking walk from Government Secretariat to his official residence Oak Over here today.
The Chief Minister inspected the ongoing snow clearance process on way and directed the authorities to ensure normalcy at the earliest so that general public and tourists do not face any inconvenience due to snowfall.
Jai Ram Thakur directed the Deputy Commissioner, Shimla to ensure that essential services were not affected due to snowfall. He also directed that vehicular traffic should be restored in Shimla town at the earliest.
Chief Minister also interacted with the general public and tourists on way to Oak Over.
Deputy Commissioner Shimla Amit Kashyap, Principal Private Secretary Vinay Singh also accompanied the Chief Minister.