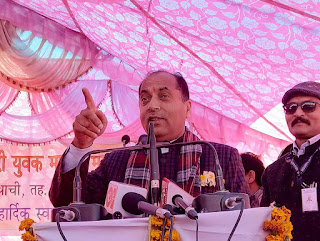 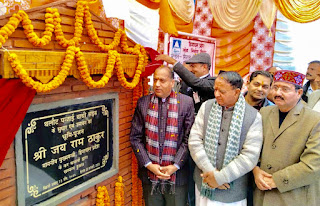 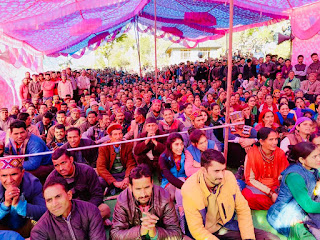 SHIMLA----    While addressing a public meeting at Murah, a remote Panchayat in Seraj Assembly constituency of Mandi District, Chief Minister Jai Ram Thakur announced opening of health sub-centre at Murah and Rs. 10 lakh each for construction of Futidhar-Tandi and Gehrakhad-Dawada roads. He said that the endeavour of the state government was to accord top priority for the development of those areas which have remained neglected so far.

Jai Ram Thakur said that the state government was according priority to provide road connectivity to even the remotest parts of the state to lessen the burden from the back of every person living in the rural areas. He said that Seraj Assembly constituency was one of the most difficult constituencies in matter of road connectivity.

He said Seraj area was poised to emerge as model Assembly constituency in the times to come. He said that it was after a long waiting that the people of Mandi district got an opportunity to head the state government. Prime Minister Narendra Modi and other senior Central leadership have a special affection and bonding with the state of Himachal Pradesh, which was proving beneficial for the all-round development of the state as it was getting financial assistance worth crores of rupees from Centre for the state.

The Chief Minister said that the state government recently completed one year in office and during the function held at Dharamshala to commemorate the occasion, Prime Minister Narendra Modi appreciated the developmental initiatives taken by the State Government.

He announced Rs. 3 lakh each for construction of Mahila Mandal Bhawan at Murah, Kandidhar and Basan. He also announced Rs. 7 lakh for span between Gachigar to Seri, veterinary dispensary at Kau Panchayat and starting of science classes at Senior Secondary School, Salot.

Jai Ram Thakur preformed bhumi pujan of improvement and strengthening of Thalout-Panjain-Thachi-Narain, Gaul-Shweta, Dhar-Chet-Lambathach road to be completed at a cost of Rs. 25.82 crore. This road would be constructed under CRF and work on this road would be started soon. He inaugurated Thalout to Kalhani road completed by spending an amount of Rs. 3 crore.

The Chief Minister flagged off bus between Mandi-Murah.

He laid foundation stone of remodelling of lift water supply scheme in Gram Panchayat Kau and Devdhar under NABARD to be completed by spending Rs. 1.10 crore.

He also laid foundation stone of additional building of Government Senior Secondary School, Murah to be constructed by spending an amount of Rs. 93 lakh.

The Chief Minister was honoured by different social and cultural organisations on the occasion.