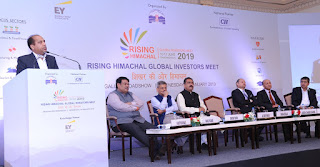 SHIMLA----The State government would provide all possible support to entrepreneurs interested to invest in Himachal Pradesh and in order to convert their investment commitments into reality, they should come forward and take benefit of the diverse investment opportunities offered by the State. This was stated by the Chief Minister Jai Ram Thakur while addressing the Captains of the Industries, entrepreneurs and industrialists during the  'Road Show-Business to Government' held at Bengaluru today.

This event was organized by the State government in association  with the Confederation of Indian Industries (CII) to showcase the immense investment potential in the State and invite the entrepreneurs to participate in the 'Himachal Pradesh Global Investors Meet-2019' slated to be held at Dharamshala on 10th  and 11th  June, this year.

The Chief Minister said that Himachal Pradesh was emerging as the next big growth story of India, displaying a robust GSDP growth rate in the past years. He said that the State was not only a Dev Bhoomi, but also poised to emerge as the 'Industrial Hub' of the Country. He said that the State government has prepared industrial policy which aims to establish state-of-the-art infrastructure, promote manufacturing sector, enhance inclusivity, foster innovation and create employment opportunities across the sectors.

He said that the State has vast potential to invest in various sectors like tourism, electronics and information technology, education and skill development, urban development/ real estate development, healthcare and Ayush, Manufacturing, pharmaceuticals, infrastructure and logistics, power and renewable energy, agro and food processing etc. Each of these sectors offers ample investment opportunities in the State. He said that the salubrious climatic condition and diverse natural settings make the State a best destination for investment in the tourism sector.

Jai Ram Thakur while inviting the entrepreneurs to come forward to invest in the State, said that the State government was also offering several incentives and concessions to the entrepreneurs, such as concession in stamp duty payable by industry, relaxed FAR norms reduced change of land use charges etc.

One of the biggest advantages the State has is availability of quality power at one of the most competitive rates in the country and this situation would continue for years to come considering the immense power potential, low generation costs and the quality transmission and distribution has put in place, he added.

He said that the Single Window mechanism within the Himachal Pradesh Single Window (Investment, Promotion and Facilitation) Act, reflects the strong commitment of the State government to ensure efficiency, transparency, timeliness and accountability in providing basic services to the citizens of the state. He said that the State also have a vibrant talent pool and educational ecosystem with a host of premier institutes of national repute such as IIT Mandi and IIT Una, etc. Moreover, the State aims at skilling more than 1 lakh youth in the next 4 years.

The Chief Minister said that in order to tap the vast potential of the State in attracting investment in sectors such as tourism, hospitality, resorts, pharmaceutical, MSME, engineering tools, information technology, Health and Wellness Centers, herbal and Ayurveda based projects, horticulture, power sector, food processing, real estate, education etc. the State government was organizing a Global Investors' Meet on 10th and 11th  June, 2019 in the salubrious and internationally known town of Dharamshala. He invited the entrepreneurs to participate in maiden Global Investors' Summit being held at Dharamshala by getting registered for the Meet at www.investinhimachal.com.

While addressing the entrepreneurs, Industries Minister Bikram Singh said that the State has a reputation of being an investor friendly and responsive administration continuously striving to streamline and simplify procedures to attract private investment. The State government has visualised a major role for the private sector in this endeavour. He said that a major focus have been made in our approach towards reforms  to make government more transparent, accountable, cost effective and time bound.

He said that the Single Window mechanism, which currently covers 10 line departments and 37 online systems, reflects the commitment and obligation to provide efficient, timely, transparent and accountable services to the investors. The Him Pragati Portal has been setup in the Chief Minister's  office, which was being regularly monitored by the Chief Minister himself to ensure speedy clearances to various projects.

Principal Secretary IT, Excise and Taxation Jagdish Chander Sharma said that the State government has established a Chief Minister's Dashboard for effective monitoring of projects being executed in the State. Most of the public services were online in the state and the State has one of the highest tele density in the country. He said that the State has immense potential of investment in IT sector as the State has pollution free environment and salubrious climatic conditions.

Chief Executive Officer TVS Motor Company K.N. Radhakrishnan said that TVS started the Company in the State twelve years back and was impressed with the responsive administration and several incentives being provided by the State government. He said that the State has investor friendly eco-system, cordial work environment and uninterrupted power supply.

An interactive session was also held with the entrepreneurs present on the occasion.