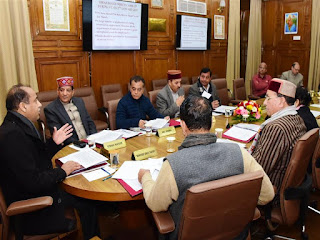 SHIMLA----The State Cabinet in its meeting held here today under the Chairmanship of Chief Minister Jai Ram Thakur decided to recommend the Governor of Himachal Pradesh to convene the budget session of H.P. Vidhan Sabha from 4 to 27 February, 2019.

The Cabinet decided to recruit 1063 constables in Police department on regular basis through direct recruitment to ensure better law and order situation in the State out which 213 will be women constable. It gave approval to fill up 200 posts of MBBS doctors on contract basis through walk-in-interview in Health and Family Welfare department to cope with the shortage of doctors in remote and far flung areas of the State.

It decided to start  new 'Ujjwala  Grihini Suvidha  Yojna' in the State to achieve the goals of Pradhan Mantri Ujjwala Yojana. Under this scheme, the selected beneficiaries of the State under Pradhan Mantri Ujjwala Yojna would be provided additional benefit of free LPG connection, free first filled gas cylinder stove etc. as being given under the Mukhya Mantri Grihini Suvidha Yojana.

The Cabinet gave its approval to procure kinnow/malta/orange at the rate of Rs. 7.50 per kg for B-grade and Rs. 7 per kg for C-grade under market intervention scheme (MIS) for the year 2018-19. As many as 54 procurement centres would be opened as per requirement of the fruit growers.

The approval was accorded to increase the incentive amount of MBBS doctors appointed  or to be appointed on contract basis  by Rs. 10,000 per month and that of specialist doctors by Rs. 15000 per month to encourage doctors to serve in tribal, remote and far flung areas of the State.

The Cabinet gave its nod to fill up vacant posts of part time water carriers on compassionate ground, provided the candidates are below the poverty line or has a low income certificate issued by competent authority, widow, member of family living in extreme indigent conditions, women deserted by her husband, handicapped person or an orphan.

It also decided to purchase 46 new ambulances under National Ambulance Service -108 to ensure prompt service to the patients in emergency.

The nod was also given to upgrade Community Health Centre, Indora in Kangra district to 50-bedded hospital along-with creation of 34 posts of various categories.

It also gave its consent to fill up one post each of Assistant Professor in Cardiology and Urology department of IGMC, Shimla through direct recruitment on regular basis.

It approved filling up of 20 posts of different categories of non-teaching staff in Dr. Y.S. Parmar Horticulture and Forestry University, Nauni in Solan district and 64 posts of Horticulture Extension Officers in Horticulture department on contract basis to strengthen the horticulture activities in the State.

It was decided to fill up 14 posts of subject matter specialist and one post of Assistant Professor Veterinary Gynaecology and Obstetrics in Chaudhary Sarvan Kumar Himachal Pradesh Agriculture University, Palampur on contract basis.

The Cabinet agreed to create and fill up different posts in the office of Vice Chairperson, Saksham Guriya Board for its smooth  and  effective functioning.

It gave its approval to create 10 posts of Junior Office Assistant in Ayurveda Department on contract basis besides filling up 8 posts of Clerks through limited direct recruitment in the department.

The decision was made to open a new veterinary dispensary at Gat of Gram Panchayat Rathiyar in district Chamba along-with creation and filling up of requisite staff.

The Cabinet also decided to transfer Wakf property under Khasra No. 123 measuring 1647.80 square meters at Sub Mohal Ward Boileuganj, Tehsil and District Shimla  on lease to State Education department for period of 30 years on lease amount of Rs. 26,991 per month with an annual increase of five percent on the lease amount.

It decided to create and fill up three posts of Junior Office Assistant (IT) on contract basis and one post of clerk through limited direct recruitment in HP Staff Selection Commission, Hamirpur.

The Cabinet decided to include ENA/absolute alcohol/ethanol/ethyl alcohol/rectified spirit and specially denatured spirit in L-19 license in Himachal Pradesh Liquor License Rules, 1986 so as to facilitate drug/medicine/cosmetic manufacturers who were otherwise forced to import these spirits from other States. This would add Rs. 1.20 crore per annum to the State exchequer.

The Cabinet gave its nod to upgrade Government Primary School, Rougi in Kullu district to Government Middle School along-with creation and filling up of requisite posts.

The Cabinet gave its approval to create IT Cell in Irrigation and Public Health Department along with  creation and filling up of six posts of different categories.

It also gave its approval to declare Makar Sakranti Mela of Tattapani in Mandi district as district level fair.

The Cabinet gave its nod to adopt new e-stamping scheme for non-judicial stamp papers to facilitate the people to procure stamp paper online and they would not need to go to treasury and banks for the stamp.

The State Cabinet gave its consent to accept M/s Ernest and Young as the Knowledge Partner for the proposed Himachal Pradesh Global Investors Meet-2019. M/s Ernest and Young will prepare knowledge contents and marketing collaterals for the proposed meet and will come out with a concrete plan for industrial investments in the State. It will also organize meetings at national and international levels with corporate houses for holding road shows besides assisting the government in signing of MoUs and their implementation at grass root level.

The Cabinet decided to open Subject Matter Specialist Office Horticulture at Bagsaid in Mandi district along-with creation and filling up of requisite posts.

It also gave its nod to create new Sub Division (Civil) at Gagret in Una district to facilitate the people of the area.

The Cabinet gave its approval to fill up 17 posts of various categories in Geological Wing of Industries Department to check illegal mining in the State.

It decided to upgrade Primary Health Centre, Basdehra in Una district to Community Health Centre along-with creation and filling up of nine posts of different categories.

The Cabinet approved to fill up three posts of steno typists in Home Guards and Civil Defence department through direct recruitment.