Announces PWD sub-division at Pangna and PHC at Tattapani 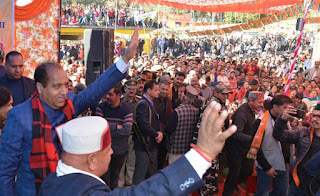 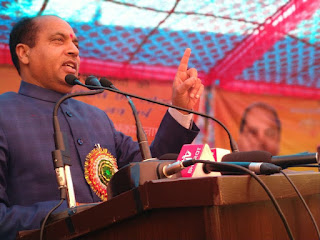 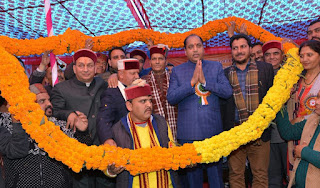 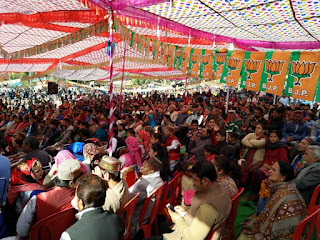 SHIMLA--------Tattapani would be developed from tourism point of view as the area has immense potential as a water sports destination.  This was stated by the Chief Minister Jai Ram Thakur while addressing a largely attending public meeting held at Tattapani in Karsog area of Mandi district today.

While congratulating the people on the auspicious occasion of the Makar Sakranti, the Chief Minister said that it was duty of each one of us to preserve the rich cultural diversity of the State. He said that due to construction of Kol dam, the area has emerged as a place which could be developed as a major water sports destination.

He said that the State government during the last one year has ensured equitable and balanced development of each and every area. A mini secretariat building and ITI building has been sanctioned for the area which would be completed by spending an amount of Rs. 14.86 crores and about Rs. 8 crores respectively. He said that developmental works worth about Rs. 12.76 crores have been sanctioned under PMGSY and Rs 3.32 crore under NABARD for the area.

Jai Ram Thakur said that the present State government inherited a loan burden of Rs. 46,500 crores due to financial mismanagement of the previous government. He said that to cope up with situation, the State government decided to prepare development projects for central funding. It was due to the benevolence of Prime Minister Narendra Modi that the State during this short period on one year succeeded in getting developmental projects worth Rs. 9500 crores from the Centre.

The Chief Minister said that the Jan Manch has proved to a boon for the common man for immediate redressal of their  grievances at their door-steps as over 22000 grievances have been settled so far in the Jan Manch organised in different parts of the State.  He said the government in its very first decision lowered the age for availing benefits of old age pension from existing 80 years to 70 years.  He said that the opposition leaders had been making much hue and cry over his Delhi visits, but now after the major initiatives had been taken for development of the State, they have nothing to say.

He said that under Himachal Grihini Suvidha Yojna, about 40,000 new LPG connections have been provided to the beneficiaries and Himachal would become the first State of the country with LGP connections in every household by the end of May this year. The Mukhya Mantri Swavlamban Yojna has been launched for providing self-employment opportunities to the youth of the State. He said that under the Him Care scheme, health cover of Rs. 5 lakh has been provided to left out families under the Ayushman Bharat.

He also inaugurated lift water supply scheme Jaswal-Savidhar constructed by spending an amount of Rs 6.76 crore. This would benefit over 3600 people of 58 habitations of the area. He addressed the people on the occasion and detailed various achievements of the state government. He announced Rs. 5 lakh for Chanayana ground and Rs. 10 lakh each for Shakrodi to Jaswal and Saj to Khangarot roads.

The Chief Minister also visited the famous Naarsingh temple and Shani Dev temple at Tattapani and performed pooja on the occasion of Makar Sakranti.

He presented gifts to the beneficiaries under  'Beti Bachao, Beti Padhao' scheme of the state government.

The Chief Minister announced PWD Sub Division at Pangna and opening of PHC at Tattapani. He also announced Rs. 3 lakh each for five Mahila Mandals of the area, upgradation of Middle School Gudrodhar to High School, Rs. 5 lakh for development of Mela ground Tattapani adding that bridges would be constructed over Bighan Khud and Satluj river.

MP Ramswaroop Sharma said that it was after the present State government assumed office that the pace of development has gained momentum. He said that Tattapani area has immense tourism potential which should be fully harnessed for development of the region.

MLA, Karsog Hira Lal said that Tattapani was a holy place for the people of the State which should developed further. He also detailed various developmental demands of the area and thanked the Chief Minister for laying foundation stones of beautification of Ghats at Tattapani which would felicitated the people visiting the place.

The Chief Minister said that Keshav Baliram Hedgewar, also known as "Doctorji" within the organisation, was the founder Sarsanghachalak of the Rashtriya Swayamsevak Sangh and the philanthropic works undertaken by the Committee formed in memory of such a great personality were indeed laudable.

President of the Committee Bodh Raj Sharma welcomed the Chief Minister and other dignitaries present of the occasion.

Earlier, on his way to Tattapani from Sunni, the Chief Minister while addressing the people during the Shimla Rural Cricket Gold Cup Tournament being organised by the Youth and Students Welfare Association said that sports activities not only help in all-round development of the youth, but also help in curbing the menace of drugs.

BJP leader of Shimla Rural constituency Dr. Pramod Sharma said that 75 teams are participating in the tournament which was inaugurated by the Agriculture Minister Dr. Ram Lal Markanda.