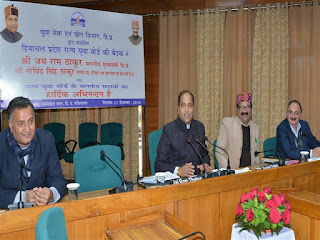 Shimla-----While presiding over the first meeting of State Youth Board held here today Chief Minister Jai Ram Thakur said that youth play a key role in process of development and empowering the youth with positive perspectives can not only develop their potential and participation but also help in national development.

Chief Minister said that we must replicate the pattern of best states and country which has shown best results for pro-actively participation of youth in nation re-building. He also urged the youth to come forward to fight the menace of drug abuse particularly amongst the teenagers.

Jai Ram Thakur said that under Nodal Club Scheme one Nodal Club has been sanctioned for every development block in the State for period of two years. He said that each nodal club was being provided Rs. 35,000 for purchase of sports and other cultural equipments. He said that Youth Festivals were being organized at State and National levels for ensuring participation of youth in constructive activities.

Youth Services and Sports Minister Govind Singh Thakur said that it was vital to make every youth empowered and capable for making a nation strong and vibrant. He said that the State Government was soon bringing out a new Youth Policy as the present youth policy was farmed way back in 2002. He said that the members of Youth Board should come with new ideas to make the Board more effective and efficient.

Secretary Youth Services and Sports Dinesh Malhotra while welcoming the Chief Minister and other members of the State Youth Board said that the Board was providing several schemes for the welfare of the youth. He said that about 14.50 lakh students were getting education in educational institutions of the State.

Director Youth Services and Sports Vinay Singh conducted the proceedings of the meeting. He said that the meeting of the Youth Board was being held after a gap of four years. He also presented vote of thanks.

Secretary Finance Akshay Sood, Joint Director Suman Rawat Mehta were present on the occasion among others.