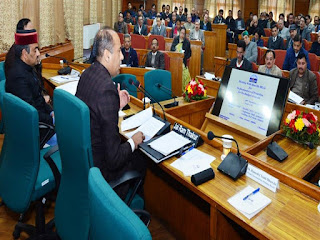 SHIMLA----    Rs. 7100 crore State plan size has been proposed for the financial year 2019-20, which is Rs. 800 crore more than 2018-19 with 13 percent increase. This was revealed by Chief Minister Jai Ram Thakur while presiding over the meetings of MLAs of Solan, Sirmaur and Shimla districts for finalization of their priorities for next financial year, here today.

The Chief Minister announced increase for implementing works of MLA priorities under NABARD through Rural Infrastructure Development Fund (RIDF). He said that projects worth Rs. 544.21 crore have been cleared by the NABARD which are recommended under MLAs priorities during the year 2018-19.

Jai Ram Thakur said that state government has succeeded in getting Rs. 9689 crore six major external aided projects from Central Government under tourism development, horticulture development, mushroom development, augmentation of drinking water, water protection and rain water conservation and forest management during last one year which would go a long way in ameliorating the income of the farmers, horticulturists and providing employment to the youth.  He thanked the Centre for providing liberal financial assistance to the state for accelerating the pace of development.

He said that State Government has adopted 'Swarnim Himachal Drishtipatra-2017' of Bhartiya Janta Party as Policy document was ensuring welfare of all sections of the society with a motto of 'Sabka Saath Sabka Vikas'.

Jai Ram Thakur said that State Government has launched 'Jan Manch' to redress the grievances of the people nearer to their homes. This is helping in saving their time and money besides avoiding unnecessary harassment for getting their problems solved.  He said that schemes of present state government such as Jan Manch, Himachal Grihini Suvidha Yojna and Mukhya Mantri Swablamban Yojna  etc. have proved boon to the people and tangible results were coming out from these.

The Chief Minister said that progress of development schemes of different departments were being reviewed and monitored online so that projects could be completed within stipulated period of time besides maintaining quality of works. He said that to bring transparency in the administration, citizen centric services were being provided online to the seekers.

MLA Doon Paramjeet Singh urged for taking effective steps for ensuing law and order situation in Baddi area. He also urged for improvement of roads in his area.

MLA Renuka Ji Vinay Kumar requested to increase  funds being provided under NABARD and MLA Fund. He also laid stress on strengthening tourism infrastructure in the area. He said that bus stands should be constructed at Dadhau and Sangrah.

MLA Paonta Sukh Ram while detailing priorities of his area said that efforts should be made to bring more and more area under irrigation facilities. He also urged for redressing the voltage problem of the area.

MLA Shillai Harshvardhan Chauhan said that FCA was the biggest hurdle in construction of the roads. He also stressed on greater coordination between various departments for time bound forest clearances. He also urged to take some steps to revive closed old limestone mines.

MLA Chopal Balbir Singh Verma stressed roads in revenue record with forest Department should be transferred to the State PWD for their proper maintenance. He also urged for adequate funds under Central Road Fund and NABARD for construction of rural roads besides filling up all the vacant posts of doctors in the health institutions of his area.

MLA Theog Rakesh Singha said that adequate funds should be provided for schemes being announced by the Government. He also raised issues of Apple Growers.

MLA Kasumpti Anirudh Singh said that works on roads under MLA priority should be taken up on priority. He also urged for opening girls college at Malyana and provide sewerage connection facilities in Mehli area.

MLA Shimla Rural Vikramaditya Singh urged the Chief Minister for enhancing the discretionary grant of the MLAs. He said that tourism activities should be promoted at various places in his constituency.

MLA Rampur Nand Lal said that the work on road for connecting Kashapath area of the Rampur should be completed at the earliest. He said that bypass should be constructed for decongesting Rampur town. He said that steps should be taken for proper maintenance of link roads.

MLA Rohru Mohan Lal Brakta said that the limit of NABARD be increased so that the MLAs can have more funds for the development of the road. He also urged the Chief Minister for early completion of Theog-Hatkoti-Rohru road. He also urged for filling up the vacant posts of doctors in Civil Hospital Rohru.

Additional Chief Secretary Finance Anil Kumar Khachi while welcoming the Chief Minister and other dignitaries said that the planning meeting goes a long way in effective and planed development of the State.