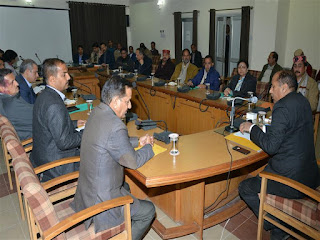 SHIMLA---While presiding over the meeting to review the preparedness of 'Jan Aabhar Rally' to be held at Dharmashala on 27th of this month, on completion of one year in office of the present State Government which would be graced by Prime Minister Narendra Modi, Chief Minister Jai Ram Thakur said that all the Departments must ensure effective coordination so that the Jan Aabhar Rally turns out to be historic event.

The Chief Minister said that adequate and proper security arrangements for smooth plying of vehicles on the Rally day must be ensured so that general public does no face inconvenience. He said that exhibitions displayed by different departments must not only be informative but they should also be displayed in attractive manner. He said that it must be ensured that beneficiaries of various welfare schemes should not face any inconvenience to reach Rally site.

He said that LCD/LED screens should be installed at strategic places and also in the rally ground for best view of the rally.