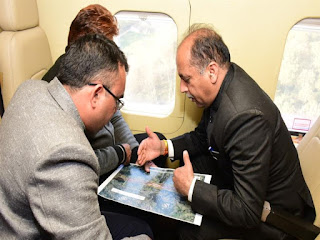 SHIMLA----Chief Minister Jai Ram Thakur conducted aerial survey of the site for construction of proposed International airport at Balh in Mandi district today along with the team of Airport Authority of India and seniors officers of the state government.

The team analysed the feasibility of landing of aircraft and the likely obstacles in the way before preparing detailed report. The detailed project report would be submitted to the Union Ministry of Civil Aviation. This project would not only give boost to the tourism activities in  the area but would also be of utmost importance from defence point of view since Himachal Pradesh shares boundary with China from tribal districts of Lahaul-Spiti and Kinnaur.

Additional Chief Secretary, Tourism Ram Subhag Singh, Additional Principal Secretary to the Chief Minister Sanjay Kundu representatives of Airport Authority of India were present on the occasion among others.