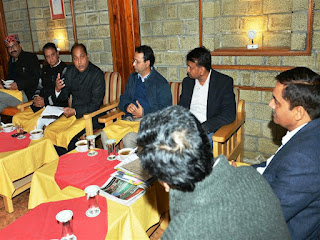 Presides over meeting with inter-ministerial central team at Mandi

Shimla----The State has suffered cumulative losses and damages worth about Rs. 1600 crores since 1st July this year during the monsoon due to untimely snowfall in tribal areas. This was stated by Chief Minister Jai Ram Thakur while presiding over the meeting of inter-ministerial central team at Mandi on Tuesday, which is on the state visit to access the damages the state has suffered due to untimely snowfall and heavy rains.

The Chief Minister said that Public Works department suffered major losses due to damages to roads and bridges etc. The total losses on this account have been accessed about Rs. 930 crores. He said 405 incidents of landslides and 34 cloudbursts have been reported in the state. The Irrigation and Public Health department suffered losses worth Rs. 430 crores while Rs. 130.37 crores to agriculture crops and infrastructures.

He said that 343 persons lost their lives due to flash floods, landslides, cloud bursts and road accidents. The state government has provided ex-gratia of worth Rs. 13.72 crore for the loss of human life. It was ensured that damaged roads and infrastructures were restored immediately in order to avoid inconvenience to the general public as well as tourists visiting the state.

Jai Ram Thakur said that as many as 4033 persons were rescued by different means from Chamba, Kullu and Lahaul-Spiti districts between 3 September to 1 October, 2018. He thanked the union government in general and Prime Minister Narendra Modi in particular for providing all possible help to ensure relief and rehabilitation work in the state. He said that it was on the request of the state government that seven helicopters of Indian Air Force were provided to the state to airlift the stranded people in Lahul-Spiti and Chamba districts. He said that as many as 292 people were air lifted from these districts.

He urged the inter-ministerial central team to recommend for maximum support from the Government of India keeping in view the gravity of losses and damages suffered by the state which were worst in the last 10 years.

Special Secretary Revenue and Disaster Management Authority D.C. Rana detailed about the losses to the state during monsoon.