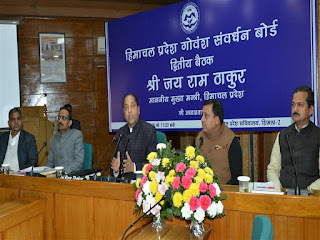 SHIMLA---The State Government was contemplating to constitute Gau Samvardhan Aayog to recommend suitable policies for protection of Gau Vansh and programmes for development of indigenous breed of cows in the state. This was stated by the Chief Minister Jai Ram Thakur while presiding over the second meeting of Himachal Pradesh Gau Vansh Samvardhan Board held here today.

The Chief Minister said the government would establish cow sanctuaries in all the districts of the state. He said that Deputy Commissioners have been directed to identify suitable land for the same so that all the formalities for setting up cows sanctuaries could be completed at the earliest. He said that procedure of transfer of land for setting up of cows sanctuaries and cows sadans would be simplified and efforts would also be made to make cows sanctuaries self reliant by developing them as 'Gau Vigyan Kendras'. He also directed the agriculture and animal husbandry departments to work incoordination for ensuring that various schemes initiated by the government for protection of animals and conservation of indigenous cows could be implemented effectively.

Jai Ram Thakur said that the state government was also giving emphasis for encouraging active participation of people, NGOS, Panchayats, Temple Trusts and other charitable organizations to open new Gau Sadans in the state and properly manage the old ones so that stray cattle could be provided shelter. He said that people in general would also be motivated not to abandon their cattle. Jai Ram Thakur said that the state government had also moved the case of naming indigenous pahari cow as 'Gauri' to the concerned authorities.

Rural Development, Panchayati Raj and Animal Husbandry Minister Virender Kanwar said that the state government would provide assistance and co-operation to the organizations and institutions promoting indigenous breed of cows. The Government would also provide all possible help for setting up of Gau Sadans in the state.