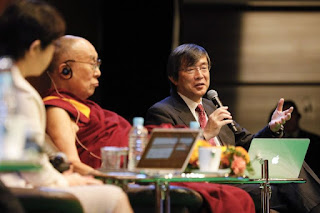 Dharamshala: His Holiness the Dalai Lama, the author and advocate of Universal Secular Ethics was joined by a group of scientists on Friday to discuss scopes for greater scientific intervention in tackling human emotions.

"Scientists use their brilliant intelligence to concentrate on the physical matter. Now science should include investigation about mind and consciousness. So that the field of scientific research extends not only in the material world but the internal mind. This is the purpose of our meeting," His Holiness opened his remarks.

He cited human inability to address and tackle negative emotions such as fear, jealousy and anger as real contributors to more violence.

"When we say real peace, it's related to inner peace. Full of anger impossible to achieve non-violence."

He noted that once people develop compassion, more meaningful dialogue can take place which will ultimately lead to a less violent world.

"In order to achieve genuine peace, firstly we must develop inner peace. To demilitarise the world, we should first demilitarise our inner world.

"Even in the 21st century, we are still seeing violence everywhere. Even though we have updated and transformed our external environment, we have failed to update our thinking which still remains outdated," His Holiness said. "People still understand violence as the right approach to solve problems."

"Now through education, we should tell people that violence is outdated, not the right method to solve human problems.

"In that respect, through scientific research, we can convince people that constant anger and fear affecting our immune system. Of course, different religious traditions have some opportunity to teach but if a religious person says don't resort to anger or force, the younger generation may not be convinced. But if scientists point out the benefits of positive emotions and the harmful effect of negative emotions, that will be more effective and successfully convince people," he added.

"So according to scientific research, you can teach the world the importance of inner peace."