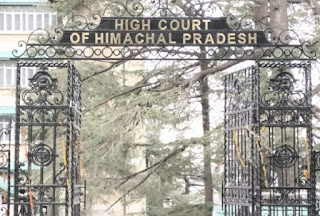 Vijyender Sharma
SHIMLA----Himachal Pradesh High court slapped fine of Rs 25,000 against a litigant for creation of unlawful litigation dismissing a trial against a RTI application here on Monday in the lower court against former Deputy Commissioner of Bilaspur.

Single judge bench of justice Tarlok Singh Chauhan upheld the contention of petitioner and former Deputy Commissioner Mansi Sahai Thakur in his verdict stating that lower court has registered case without having any lawful provision to admit the case.

The court said that litigant should proceed before the concerned applet RTI appellate commission to seek justice in the matter however by creating unlawful litigation and court ignoring the set procedure of law allowed to file the petitions.

Passing comment on the lower court in matter High court maintained that the subordinate court overlooked notifications issued by this court time to time not indulged in such litigation moved before court without having lawful provisions.

Meanwhile the petitioner or former Deputy Commissioner Ms Sahai stated in the writ petition filed before the HC that she had replied in the lower court, that case could not be made against her however the lowercourt decided to sustain litigation against her.

The High court directed the Registrar of HC to pass another notification on the matter once again so that such litigation could not be created without the following the laws.

The matter pertained to the RTI application in which a litigant and RTI applicant Madan Lal Sharma of Bilaspur moved in the lower alleging that power of attorney of his lawyer was rejected by the petitioner.

Former Deputy Commissioner stated in the petition that she rejected the plea of power of attorney since no provisions of lawyer exists in the RTI Acts however the lawyers or litigants could join hearing in person.