Deputation thanks CM for appointing Ram Singh as Vice Chairman 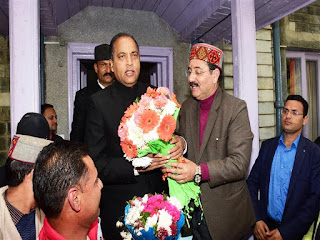 Deputation thanks CM for appointing Ram Singh as Vice Chairman

SHIMLA---    A deputation from Kullu Assembly constituency met Chief Minister Jai Ram Thakur at his official residence 'Oak Over' on Thursday to thank him for appointing Ram Singh as the Vice Chairman of HPMC.

Addressing the hundreds of supporters of Ram Singh gathered on this occasion, the Chief Minister urged the BJP leaders and workers to work hard with coordination to ensure victory of the party with big margin in coming Lok Sabha elections.

He said efforts had been made to get more and more financial assistance from the centre for speedy development of the state and in a short tenure of just ten months, the state government has succeeded in getting developmental projects worth around nine thousands crores from the government of India.

Jai Ram Thakur said that Prime Minister Narendra Modi had been always considerate towards Himachal Pradesh and whenever we sought any help, he had given more than demanded. He said the country and the state need Narendra Modi for many more years and therefore all the party supporters should work hard to bring BJP back again to the power at the centre.

Congratulating Ram Singh on being given responsibility, the Chief Minister expressed hope that he would strive hard for ensuring welfare of the horticulturists.

Ram Singh also thanked the Chief Minister for giving him the responsibility of Vice Chairman of HPMC and said that he would make honest efforts to come up to the expectations of the people.