CM stresses for close coordination between government and organisation 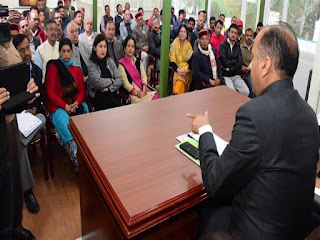 CM stresses for close coordination between government and organisation

SHIMLA---It is vital for the government and the organization to work with close coordination so that policies and programmes initiated by the state government could reach the targeted groups, stated Chief Minister Jai Ram Thakur while addressing the Mandal Milan programme of BJP Shimla Rural Assembly constituency, here today.

The Chief Minister said that during the ten months tenure of the state government, several welfare and developmental oriented schemes have been launched in the state. It is essential that public in general and the targeted groups in particular should be sensitized about these schemes so that they could derive benefits. He said that regular meetings should be held for monitoring the pace of developmental schemes in their respective areas and shortcomings should be brought to the notice of the concerned authorities for rectification.

Jai Ram Thakur said that due to effective coordination between the Central and State governments, the state has succeeded in getting sanctioned central projects worth Rs. 9000 crore. He said that this also shows the benevolence and concern for development of the State by Prime Minister Narendra Modi.

The Chief Minister said that schemes like lowering age limit for getting old age pension without income limit, Himachal Grihini Suvidha Yojna Mukhya Mantri Swavlamban Yojna etc. have ensured welfare of old persons, women and youths of the State. He said that efforts should be made to sensitize the people about these schemes.

President BJP Mandal Randeep Singh Kanwar thanked the Chief Minister for giving special attention to the problems of the area.