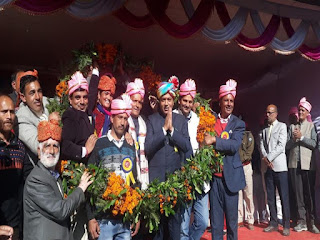 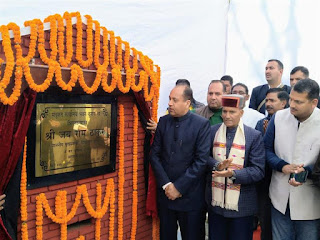 SHIMLA--- Chief Minister Jai Ram Thakur while presiding over the closing ceremony of the four-day Seraj Deep Festival organized in the cultural arts forum of Thunag laid the foundation stone of Mini Secretariat building to be constructed at the cost of Rs. 28 crore in Thunag of Seraj Valley.

While addressing the massive public gathering on the occasion, Chief Minister said that due to the construction of mini secretariat building in Thunag people of the remote areas of the valley will get the facilities of works being done in different offices at one place and this will fulfilled the long standing demand of the people.

He said that State government has done unprecedented work for the prosperity and over all development of the State, due to which this hilly State have been identified as the synonym for development. He said that State government in its tenure has made efforts to get approval for the projects of worth crores by the Central Government, due to which various projects of      Rs. 9000 crore have been approved for the State in the last nine months.

He said that organizing the Seraj Deep Festival, celebrated on the occasion of Deepawali not only promotes cultural heritage but also provides an opportunity to local folk artists and players to display the talent. While describing the contribution of culture in the development of society and nation, he said, that regional cultures nurture the national culture. He urged the youth to contribute in order to keep the rich culture alive.

Chief Minister Jai Ram Thakur announced the district level status to Seraj Deep festival and said that the festivals promote the promotion of rich cultural heritage of the State.

He said that money will be approved after getting the estimation for making a taxi stand in Thunag. He recommended for providing Rs. three lakh each for the construction of five Mahila Mandal buildings. He announced Rs. 51000 from the CM discretionary fund for the presentation of cultural programmes on this occasion.

Earlier, Chief Minister Jai Ram Thakur participated in the grand Shobha Yatra during the celebration of the festival and unveiled the exhibitions organized by various departments.

He also distributed awards to the winners of the sports competition organized during the festival.