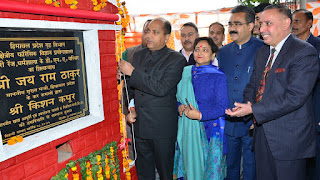 Dharmshala-----Chief Minister Jai Ram Thakur today laid foundation stone of DNA Block of Regional Forensic Science Laboratory (RFSL) Northern Range, Dharamshala in Kangra district. This block would be constructed at a cost Rs. one crore and it will help the districts of Chamba, Kangra, Una to get DNA reports from RFSL Dharamshala.

The Chief Minister directed to complete the construction of the building within one year and also directed to put up other requirements of the department to encourage use of more scientific tools which are employed in criminal investigations as it brings transparency and speed in the investigation. He also appreciated the efforts of the department and formally released first NABL accredited report of cyber crime of district Kangra.

Jai Ram Thakur said that RFSL, Dharamshala is the First regional lab in the country to get accreditation from National Accreditation Board for testing and Calibration Labs and has successfully participated consecutively in the proficiency testing for the last two years with Asia's best Govt. Forensic Laboratory, Hong-Kong.

The Chief Minister also inaugurated Video Conferencing facility at RFSL, Northern Range, Dharamshala which has recently been acquired by incurring expenditure to the tune of Rs. 10 Lakhs.  The state-of-art for Expert testimony through video conferencing was created under State Innovation Fund and dedicated 2 mbps line provided by the Information & Technology Department, Himachal Pradesh. He said that this facility would save man hours of forensic experts in transit and will help to utilize the saved time in generating quality reports after analysis of cases and would expedite disposal of crime cases analysis of cases to increase disposal of crime cases.

Director State Forensic Science Laboratory, Shimla Hills Junga Arun Sharma told that similar infrastructure for DNA facility is also planned for RFSL Mandi and Himachal Pradesh will become the first in the country to have the DNA facility in all forensic labs in the state which would help to generate the DNA profiles required in preparing DNA database as per trend in modern forensic labs of the world.