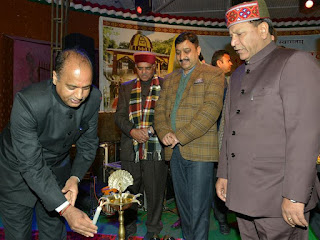 Chief Minister also released souvenir brought out by the organisers on the occasion.

While congratulating the people of the state in general and of Sirmour district in particular, on the occasion of the International Renuka fair Jai Ram Thakur said that the Himachal Pradesh was known for its colourful and rich cultural and tradition. He said that fairs and festivals celebrated in every nook and corners of the State not only symbolises rich culture heritage of the State but also ensure conservation of rich culture and tradition of the state. He said that thus it becomes responsibility of everyone of us to promote and preserve the culture of the State for the coming generations.

Jai Ram Thakur said that SDM office would be opened at Sangrah from next financial year. He also announced IPH Sub Division for Dadhau.

Jai Ram Thakur said that the previous government in the State opened educational and health institutions in the state in the fag end of its tenure. He said that five degree colleges were announced for Sirmour district alone during the tenure of the previous state government and that too few months before assembly elections and with budget provision of Rs. One lakh each for these colleges.

The Chief Minister said that the state was fortunate to have benevolence of Prime Minister Narendra Modi. He said that today he has been acknowledged as a world leader even by developed countries.

For Shillai constituency, Chief Minister announced Mukhiya Mantri Lok Bhawan at Kafotta, opening of ITI for Sataun, Opening of Civil Court at Shillai and Rs. 10 lakh for channelisation of Ambon Khad. He also announced upgradation of Government High School Sadyar to Senior Secondary School. A part from Shillai Civil Courts would also be opened at Tisa and Banjar.

Various social, cultural and political organisations honoured the Chief Minister on the occasion.

A documentary on Shri Renukaji was also released on the occasion.

Speaker Vidhan Sabha Dr. Rajiv Bindal while addressing the gathering said that the Sirmour district has immense tourism potential and urged the Chief Minister to explore this potential. He said that this would open new vistas of employment to the youth of the State. He thanked the Chief Minister for providing developmental projects worth crores of rupees for Sirmour district.

Member of Parliament Virender Kashyap also spoke on the occasion. He said that whole state in general and Sirmour district in particular was poised on the path of progress and prosperity under the leadership of Chief Minister Jai Ram Thakur. He said that the Union Government has a approved several developmental schemes worth crores or rupees for the state.

Vice Chairman State Civil Supplies Corporation Baldev Tomar while addressing the gathering said that Renuka fair was one of the most old and traditional fair of the state and has a very ancient history.

BJP Leader from the area Balbir also spoke on the occasion and listed various demands of the area.

Chairman, International Renuka Fair and Deputy Commissioner, Sirmaur, Lalit Jain welcomed and honoured the Chief Minister and other dignitaries present on the occasion by presenting them Shawl, Himachali Cap and memento.