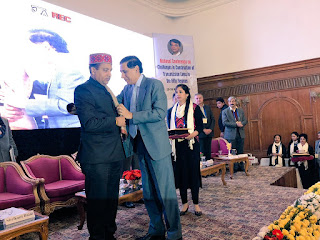 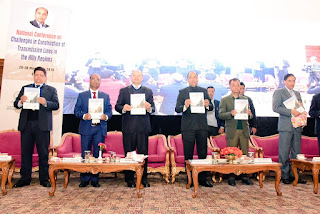 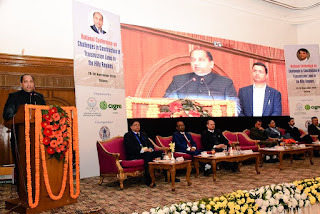 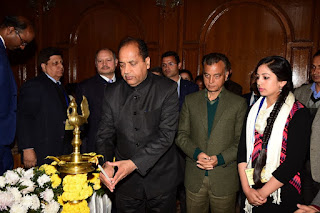 SHIMLA----Chief Minister Jai Ram Thakur said that a separate strategy needed to be chalked for developing cost effective and reliable power transmission and distribution system for the hilly areas that ensures uninterrupted power supply to the consumers. He was presiding over the national conference on 'Challenges in Construction of Transmission Lines in the Hilly Region' organized by Central Board of Irrigation and Power and CIGRE-India and co-organized by Himachal Pradesh Power Transmission Corporation Ltd. here today.

The Chief Minister said that the power sector in the country was growing at a fast pace and the conference would provide a forum for open discussions and exchange of information on the state of art technology as it was very necessary for the professionals to capture the latest knowledge and innovations to keep pace with the advancement taking place in this sector. He said that slope stability, landslide, avalanche issues and solutions thereof needed to be redressed effectively.

Jai Ram Thakur said that the State Power Transmission Corporation Ltd. was developing transmission systems for hydro projects in the state. He said laying transmission lines in the hilly areas was difficult as compared to plain areas and therefore special strategies needed to be chalked out for providing reliable, uninterrupted and cost effective power supply to the consumers.

He said that hydro power projects with total capacity of about 10,000 MW were at different state of execution and efforts were being made to ensure that all these projects get started at the earliest. Himachal Pradesh became fully electrified way back in 1988, and now the government was focusing on quality and uninterrupted power supply. He said that efforts were also being made for effective power evacuation from completed power projects.

The Chief Minister also stressed on one valley one line. He said that efforts were also being made to promote solar power potential in the state and he was of the opinion of providing solar light facility in the villages.

He released the proceedings of the conference on the occasion.

Chairman-cum-Managing Director, SJVNL Nand Lal Sharma said that the Himachal Pradesh had power potential of over 27,000 MW which comes to about one fourth of the total potential of the country. He said that being a hilly state, it requires special designs for construction of power transmission lines.

Director, Central Board of Irrigation and Power P.P Wahi said that since our nation had varied geography and topography having wide range of weather conditions across different parts, it was vital that a proper strategy be framed for meeting out the challenges for construction of transmission lines particularly in hilly areas.