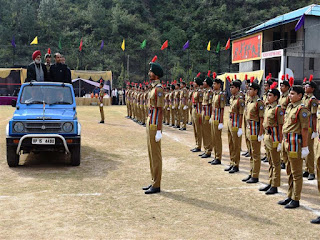 SHIMLA---    Chief Minister Jai Ram Thakur called upon the teachers and parents to provide cultural education and moral values to the younger generation so that youth can become better citizens of the future. Jai Ram Thakur was presiding over the 27th annual function of Pinegrove School at Subathu in Solan district today.

Jai Ram Thakur said that India is known for its rich cultural traditions and customs in the world. He said that it is the moral responsibility of all of us to promote our culture. He said that teachers and parents must provide their full support in this direction.

Expressing deep concern over the growing trend of drug abuse in the young generation, Chief Minister said that it is very important to protect the younger generation against the ill effects of drug abuse. The state government is working in a planned manner to eradicate this evil from society. Concerted campaign is being organised at different levels for Nasha-Mukt Himachal. He said that the cooperation from all sections of the society is expected to make society free from drug abuse in a right manner.

Jai Ram Thakur said that school days are the most important and happiest days in every individual's life. He urged the students to utilize their time in productive activities and set goals for their brighter future. He said that the most important factor in the progress of the country and the state is youth and young generation should remain committed to provide positive direction to their energy. He said that the students must always remember the contribution of their teachers and the things they have been taught in the school.

He said that he has been coming to this school as a parent earlier also. He appreciated the work being done by this school in the interest of the students. He said that starting from a humble beginning this school has made a special identity in northern India, especially in Himachal Pradesh.

Jai Ram Thakur congratulated the school students for their achievements. He appreciated the school management for expansion of better infrastructure facilities in the school.

The Chief Minister said that the government has started several schemes including 'Medha Protsahan Yojna' to provide coaching facilities to the talented students for the competitive exams.

Earlier he laid the foundation stone of 'Sangam Setu' in the school premises. Three Gram Panchayats of the area have contributed to the construction of this bridge.

School Director Capt. A. J. Singh welcomed the Chief Minister and provided detailed information about the activities of the school.