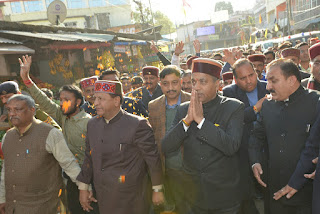 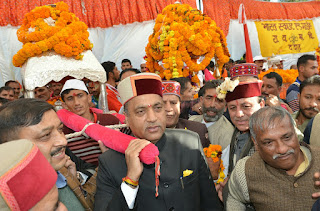 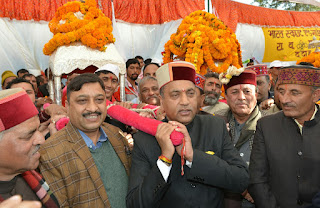 The fair marks the annual union of Lord Parashuram with his mother Goddess Renuka Ji on the eve of 'Dashmi'.  Every year on the occasion of "devprobodhini ekadashi", the traditional Renuka Ji fair is organised on the banks of the Renuka lake in which lakhs of devotees from across the country participate with great enthusiasm.

As per the tradition, the palanquin of Lord Parshuram is brought to Renuka from the ancient temple in Jamu Koti village and after performing religious ceremonies, including a holy dip in the lake it is carried back.

The Chief Minister said that Himachal Pradesh was a rich repository of diverse culture and tradition. The fairs and festivals celebrated here not only symbolises rich culture and diverse tradition of the state but also provide healthy entertainment to the local people as well as the tourists. He said even people of the state were known for their love and regard for their traditional customs and culture.

The devotees dressed in colourful traditional attire danced to the tune of traditional songs and divine melodies to celebrate the festival of the main deity making the atmosphere mystic and blissful.

The Chief Minister was given rousing reception enroute from Maina Bag helipad, about 14 kilometres from Renuka to the Mela ground.