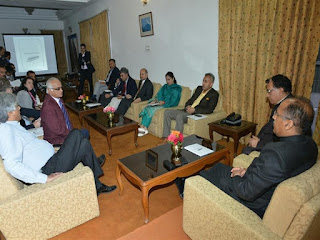 SHIMLA----A presentation was made by the INTAMIN Transportation, Switzerland before the Chief Minister Jai Ram Thakur here today to start monorail services in Shimla town. This Switzerland based company has over 50 years experience in the monorail projects and have already completed such projects in several countries.

The proposed mono train would start from ISBT Tutikandi and conclude at Panthaghati with twelve stops in between at crossing, MC parking, 103 tunnel, Vidhan Sabha, Victory tunnel, DDU hospital, lift parking, Himland, Talland, SBI ATM Khalini, BCS and Kasumpti. The proposed total distance is 14 kilometers and would take 20 minutes and could carry about 1000 passengers in one hour from one point to another.

The Monorail can ideally serve as the feeder line and could replace the bus routes inside the city. This project would require very little land and almost no tree would be cut.

The representatives of the INTAMIN Transportation, Switzerland said that after all formalities have been completed this project would take about two years for completion.