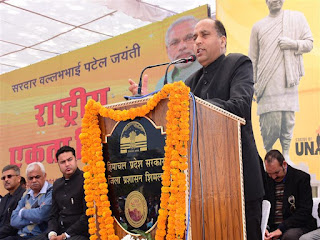 SHIMLA---The contribution of Sardar vallabhbhai Patel in integration of princely States was immense and it was due to his farsightedness and visionary leadership that India became sovereign nation.

This was stated by Chief Minister Jai Ram Thakur while addressing gathering at the Ridge, Shimla on the occasion of Rashtriya Ekta Diwas, also known as National Unity Day, to commemorate the 143rd birth anniversary of Sardar Vallabhbhai Patel, the Iron Man of India.

The Chief Minister said that as the first Deputy Prime Minister and Home Minister of India, Sardar Patel played a key role in the integration of the more than 562 princely states into the Indian federation. He persuaded the princes of 562 states for integrating in to Indian republic.

Jai Ram Thakur said that in the 1946 election for the Congress presidency, 12 out of 15 Congress committees nominated Sardar Vallabhbhai Patel but he stepped down in favour of Jawahar Lal Nehru on the request of Mahatma Gandhi, which shows his greatness and respect to Gandhi Ji.  He said that it was the strong will power and administrative acumenship of Sardar Patel that the princely states of India agreed to come under one flag.

He said that it was vision of Prime Minister Narendra Modi that as a mark of respect to such a towering personality, a 182 metre tall world's highest Statue of Unity of Sardar Patel was  unveiled by him today near Sardar Sarovar Dam in Kevariya village of Narmada district of Gujarat. He said that this statue was not only a true tribute to Bharat Rattan Sardar Patel, but would also emerge as a major tourist destination of the country.

The Chief Minister said that he was fortunate enough to be associated with this historic monument for which he collected iron from all the then 3243 gram panchayats of Himachal Pradesh for constructing of this statue.

Earlier, the Chief Minister flagged off 'Run for Unity' rally from Ambedkar Chowk. He also gave away prizes to winners of inter school debate and essay competition organized by the Shimla district administration.

Speaking on the occasion, former Chief Minister Virbhadra Singh said that it was an historic day as on the one hand that nation was celebrating the birth anniversary of Bharat Ratan Sardar Patel, who worked for integrating the nation and on the other hand, it was paying homage to former Prime Minister Bharat Ratan Indira Gandhi on her death anniversary, who laid down her life for national integration.