Mahatma Gandhi will remain source of inspiration for centuries: CM 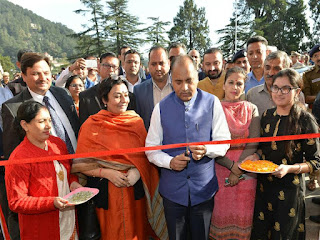 Mahatma Gandhi will remain source of inspiration for centuries: CM

SHIMLA---Mahatma Gandhi is source of inspiration for everyone and would remain so for centuries to come. This was stated by the Chief Minister Jai Ram Thakur while inaugurating multi-media exhibition 'Vikas Ke Rang-Bapu Ke Sang' organised by the Field Outreach Bureau, Union Ministry of Information and Broadcasting on the occasion of 150th birth anniversary of Mahatma Gandhi, here today.

The Chief Minister said that Prime Minister Narendra Modi ensured that the 150th Anniversary of Gandhi Ji was celebrated in a befitting manner in all the States of the country. He appreciated the efforts of the Union Ministry for organising such an exhibition on Bapu and said that such exhibitions should be organised in other parts of the State as well so that people could be educated about the life and teachings of Mahatma Gandhi.

Jai Ram Thakur said that the role of Gandhi Ji in freedom struggle was unmatched and unparalleled. Not only this, he taught the world how to effectively walk on the path of simplicity and truth. The issue of cleanliness was very near to his heart and his vision of clean India has been effectively carry forward by the Prime Minister so that our nation could become green, clean and pollution free. He said that it was due to the efforts of the Prime Minister that the Swachh Bharat Mission had emerged as a people's movement in the country.

He said that Himachal Pradesh had emerged as the second state of the country after Sikkim to be declared as open defecation free state. This had been possible due to the collective efforts of the State Government and people of the State. The increasing tendency of drug abuse amongst younger generation was an area of concern for the nation and the State was also not an exception. He said that the State Government would soon launch a State wide campaign against drug abuse, particularly amongst the youth.

Additional Director General Information and Broadcasting Ministry Dev Preet Singh said that Mahatma Gandhi had special love for Shimla and he visited this town several times. She said that the multimedia exhibition had been organised to showcase various aspects related to Gandhi Ji.

Artists of the Ministry presented developmental songs and colourful cultural programme on the occasion.