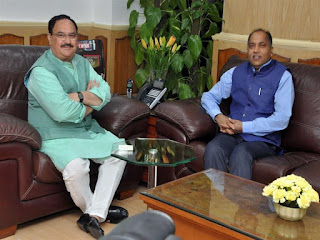 SHIMLA---      Chief Minister Jai Ram Thakur called on Union Health and Family Welfare Minister J.P. Nadda at New Delhi on Wednesday evening. He apprised the Union Minister about the progress of various projects and programmes in the health sector and added that he himself was taking keen interest in progress and implementation of these projects. He urged the Union Minister to review the ongoing schemes in Himachal Pradesh.

Jai Ram Thakur said that state government was keen about construction of AIIMS at Bilaspur and requested to expedite the formalities pending at the end of the Ministry so that the work could be started soon. He also detailed about the other medical colleges functioning in the state.

The Chief Minister informed the progress of the ambitious Ayushman Bharat Yojana and said that the scheme would benefit 22 lakh people in the hill state. A total of 175 hospitals in Himachal Pradesh have been registered under the scheme and about five lakh families have been covered under the National Health Insurance Scheme in the state.

The state is also implementing the Mukhya Mantri State Healthcare Scheme, under which over 1.05 lakh families have been covered, he added.