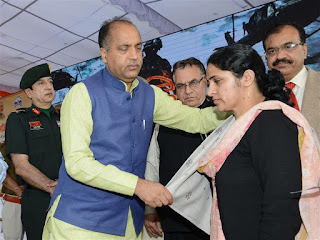 He said that the surgical strike was possible due to strong decision taken by Prime Minister of India Narendra Modi in this regard. He said India has emerged as strong economic and military power in the recent years owing to strong political leadership at present in the country.

He lauded the role of armed forces in times of peace especially the role of forces in rescuing operations during disasters. He said more than 3000 precious lives could be saved due to swift action of security forces in heavy snow in some districts of the State. He said around 250 stranded tourists who were caught in heavy snowfall in Lahaul and Kullu were airlifted and rescued by the forces.

Jai Ram Thakur said that progress and development of the country was possible only when the borders of the nation were secured and peaceful life prevailed in the country.

He said the present government is committed for the welfare of serving soldiers, ex-servicemen and war widows. He said State Government has increased the pension of non pensioners' ex-servicemen or their widows from Rs. 500 to Rs. 3000 per month.

Chief Minister also visited the display of weapons by Army which included rifles, machine guns and mortars. He also visited the exhibition  put up by Field Outreach Bureau of Information and Broadcasting Ministry.

Education Minister Suresh Bhardwaj listed the illustrious history of bravery of Indian soldiers from ancient times to surgical strike conducted by the Indian Army. He said gains of military were lost by decisions of the political leadership of that time.

Member of Parliament Virender Kashyap said that present political leadership alongwith bravery of Indian soldiers gave a befitting reply to ill designs of neighbouring country. He said the army is capable of giving right message at right time to any enemy posing threat to Indian sovereignty.

Col. Karamvir Singh Panwar and Major Mahavir gave a presentation on the surgical strike conducted by the Army in Pak Occupied Kashmir.