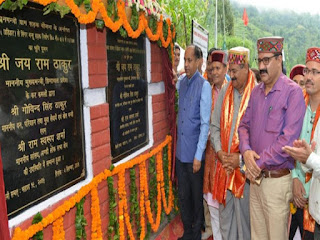 Jai Ram Thakur said that today itself he has laid foundation stone of road projects worth about Rs. 26 crore. This would ensure better road connectivity to the remote villages of the area. He said that development in the State was not possible without the generous Central assistance. He said that the State Government has succeeded in getting financial assistance of Rs. 6000 crore for the State from Centre due to the love and benevolence of Prime Minister Narendra Modi.

The Chief Minister said that the ambitious Rohtang Tunnel was the great gift of late Atal Bihari Vajpayee, which on completion would provide all weather road connectivity to hinterland Lahaul valley with the rest of the world. He said that in the first Budget presented by him as many as 30 new schemes have been announced in the Budget 2018-19, which was a record in itself. He said that it has been ensured in the budget that all sections of the society get due weightage.

Chief Minister also planted a sapling in the premises of NHPC at Nagwain.

Transport and Forest Minister Govind Singh Thakur said that the State was bound to become one of the most developed State of the country. He said that the Chief Minister was committed to make Himachal Pradesh a major tourist destination of the country. He also thanked the Chief Minister for making an initiative for collective strategy with neighbouring States for checking the menace of drug abuse particularly among youth.

Member of Parliament Ram Swaroop Sharma said that it was for the first time that Chief Minister of the State belongs to Mandi Parliamentary Constituency. He said that soon after assuming office the present State Government lowered the age limit of old people for getting old age pension from 80 years to 70 years, thereby benefitting about 1.20 lakh old persons of the State.