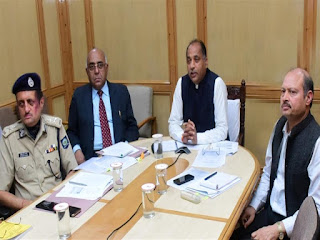 SHIMLA----A joint strategy should be chalked out and implemented effectively to eradicate the drug menace from the society, stated Chief Minister Jai Ram Thakur while addressing the Regional Conference of Chief Ministers of Haryana, Punjab, Himachal Pradesh, Uttarakhand, Rajasthan and Administrator of Chandigarh Union Territory through video conference, here today.

The Chief Minister said that he was supposed to personally attend this important meeting, but due to bad weather he could not attend it. He said that drug abuse has assumed a major threat to the society, thus it was essential to chalk out a joint strategy to tackle this social vice. He said that this was not an issue confined to a few states, but drug menace was a universal problem. He said that about 1000 arrests had been made in the State against drug peddlers. He said that since the State has borders with several states, it was essential that joint task force be constituted to check cross border drug peddling.

He said that due to greater pressure on the drug peddlers in the neighbouring States, the cases of drug related arrests had increased manifold in Himachal Pradesh. The Charas or cannabis was one of the major substances used by drug addicts in the State, but now synthetic drugs had emerged as a major area of concern. He said that substance addiction had a severe impact not only on the individual, but those closest to them and society as a whole.

Jai Ram Thakur said that the State Government was contemplating to evolve a mechanism for regular medical checkups in schools to diagnose students so that early signs of drug abuse could be detected. He said that regular follow up should be ensured so that an effective strategy could be finalised. He said that effective sharing mechanism should be developed to share information regarding drug peddling so that the culprit could be nabbed.

He said that drug abuse and peddling also attribute to crime, diseases, accidents, domestic violence, abuse, job loss, and homelessness. He said that long term strategy should also be chalked out to engage youth in constructive activities. He said that parents should also keep an eye on abnormal behaviour of their teenage children.

The Chief Minister said that large amount of crime could be attributed to substance addictions. This is because many addicts are trying to obtain money to purchase their substance of choice and when a purchase goes wrong they need more money and violence normally occurs during these situations, he added.

It was decided in the meeting that a Common Secretariat would be established in Panchkula in Haryana to check this social vice and all the neighbouring State would appoint a Nodal Officers for effective coordination. It was also decided that Uttar Pradesh would also be requested to be part of this campaign and the Chief Ministers of these northern State would meet after every six months in a year and Secretary level meeting would be at least four times in a year.

Chief Minister of Punjab Captain Amarinder Singh said that as soon as the Government came to power in Punjab it came heavily against drug peddlers. He said that special campaigns have been launched to check this evil. The Punjab was also requesting the Centre to bring in severe punishment or death sentence for those involved in drug trade which would act as a major deterrent for the drug peddlers.

Chief Minister of Haryana Manohar Lal Khattar said this meeting had been held to deliberate on very vital issue of drug abuse. He said that it was unfortunate that the drug abuse was a biggest challenge for our society and the Haryana government was working relentlessly to check it. He said that the State was also working with close coordination with other States to arrest drug peddlers.

The representatives of Rajasthan, Chandigarh and New Delhi governments also spoke on the occasion.