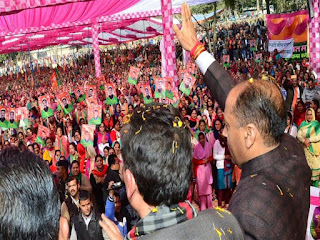 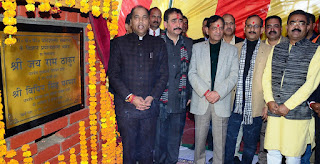 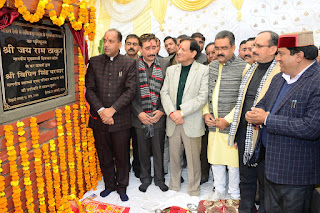 Dharmshala------Chief Minister, Jai Ram Thakur hailed the announcement of Finance Minister, Shri Arun Jatiely for  the worlds largest flagship National Health Protection Scheme in the Budget, wherein 10 crore people would get free health care benefits with Rs  5 lakh as insurance cover to each family in case of critical ailment and to the poorest of poor under the scheme.

He was addressing a mammoth public meeting at Bhawarana, in Sulah constituency of district Kangra today.

He also lauded the decision of providing Minimum Support Price to the farmers  in Union Budget 2018-19 and said  that  this was a step for increasing the income of the farmers and helping them tremendously.

The Chief Minister said that the Union Government had sanctioned 69 National Highways for the state but the congress never ever pushed with even inviting tenders for preparation of Detailed Project Report. Roads are the life line of the people of the State and with the announcement in Union Budget regarding connecting 3000 habitations with roads under Pradhan Mantri Grameen Sadak Yojna (PMGSY) in the State, will give added boost to the road infrastructure in Himachal Pradesh. Chief Minister thanked the Union Finance Minister for the same. He also hailed the decision of Union Budget for mention of completion of Rohtang Tunnel soon.

'To maintain clean image in politics was more important and Member of Parliament Shri Shanta Kumar was a well known example. I wish Shri Shanta Kumar would have been here today with us, said the Chief Minister. I assure that the government will have zero tolerance towards corruption and we will form a government which would be dedicated to the people, and work for the people', said the Chief Minister.

He said that in congress government few retired serving on plum posts took many decisions without bringing them in knowledge of Chief Minister Shri Virbhadra Singh. The retired people appointed on these posts were ruling the state in real sense with ex Chief Minister just as a titular head.

Chief Minister said that the BJP government was committed to the poor and needy and not to favour retired, tired and the hired.

'I thank the people of the state and the BJP workers and organisation for the  hard work they had put in for ensuring to form the BJP government thus putting an end to corrupt practices in congress regime' he said.

He also reiterated his resolve to put an end to Drug, Forest and Mining Mafia. He said that the government will also ensure that no stray cattle will be seen on the streets and busy roads. We were rolling out a concept for construction of Gau Sadans, he said. He also thanked the Union Finance Minister for announcing Gobar Dhan Yojna a step towards clean rural India, he said.

The Chief Minister thanked the Union Government for launching the second phase of 'Ude Desh Ka Aam Nagrik'  (UDAN),under regional connectivity scheme to facilitate visitors and to give added boost to tourism.

Health Minister Shri Vipin Singh Parmar accorded warm welcome to the Chief Minister and other dignitaries present on the occasion. He thanked the people of his constituency for huge mandate to him and also placed his demands including declaring Thural Sub-Tehsil to Tehsil. He also demanded a 50 bed Hospital Bhawrana. He also demanded PWD division for Sulah besides other demands.

• Announced upgradation of Veterinary dispensary at Sulah to Veterinary Hospital.

• Announced a sum of Rs. 10 lakh for Sarai (inn) in Guru Ravidaas Temple at Bhadrol.