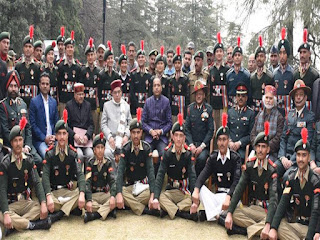 He also congratulated the 26 NCC cadets who participated in Republic Day parade in New Delhi. He said that it was a matter of pride for the State to see children participating in a big National level event. He announced to provide a sum of Rs. 3.40 lakh to 26 cadets who were part of contingent in Republic Day Parade.

The Chief Minister said that the State Government was endeavouring to promote sports activities in a big way by providing adequate infrastructure to facilitate the sportspersons.

He said that a lot had to be done in providing best of facilities to the sports persons of State who have excelled themselves in various sports thus bringing laurels to the State.  He said that government was also mulling to have a sports academy in the State adding that every effort would be made to promote sports activities.

Shri Jai Ram Thakur said that State government would give added impetus to sports activities in the rural areas to tap the hidden talents.

Shri Vijay Kumar Sharma won silver medal in shooting in London Olympics. He is also a recipient of Padmashree, Ati Vishisth Seva Medal (AVSM) besides other honours and Arjuna Award, the highest award in sports category

The Chief Minister said that State government was contemplating few changes in H.P. Sports Bill to make it more realistic.

Education Minister Shri Suresh Bhardwaj was also present on the occasion among others.