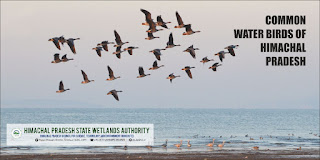 SHIMLA---Chief Minister Jai Ram Thakur will preside over the state level World Wetlands Function to be organized in the Mini Secretariat at Jwali on 02 Febraury on the eve of World Wetlands Day being held under the aegis of HP Council for Science, Technology and Environment (HIMCOSTE) in collaboration with the departments of Forest, Education, Tourism, Fisheries and District Administration. The theme of this year's World Wetlands Day is 'Wetlands for Sustainable Urban Future'. The day is celebrated internationally each year on 2nd February to mark the anniversary of the signing of the Convention on Wetlands of International Importance (Ramsar Convention), as it was on this day that the convention was signed in 1971 in Ramsar city of Iran.

Additional Chief Secretary Manish Nanda told that Himachal Pradesh encompassed a wide variety of wetlands, spread over in various ecological zones which were the source of livelihood for the local community as it had immense aesthetic and tourism values. Presently, there were three Ramsar Sites in the state, which included Pong Dam in Kangra, Renuka in Sirmaur and Chandertal in Lahaul-Spiti. Besides, Ministry of Environment, Forest and Climate Change had included Rewalsar in Mandi and Khajjiar in Chamba district, she added.

The first World Wetland Day was celebrated in 1997. Since then the government agencies, N.G.Os. and community groups have been celebrating this day by undertaking actions to raise public awareness on wetland values, benefits and promote the conservation and wide use of wetlands. The wetlands provide enormous benefits to society including fresh water, purifying and filtering harmful wastes from water, source of foods, acting as buffer for extreme events and help combat climate change through providing protection from extreme weather events; as a source of livelihoods for countless number of people as well as supporting a vast array of biodiversity.

A spokesperson told the main function was being held near Pong Wetland in which students of different institutions and people from different walks of life would participate. The chief minister would give away prizes to winners of various events held earlier to raise awareness and sensitize the public. Dignitaries including health minister Vipin Parmar, local M.L.A Arjun Singh, ACS Manish Nanda Member Secretary HIMCOSTE Kunal Satyarthi,  would participate in the main function.