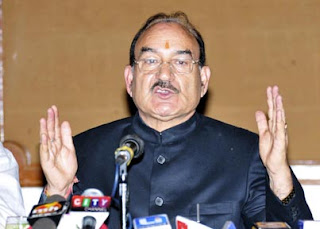 Vijyender Sharma
Shimla----The Himachal Pradesh government under the leadership of Chief Minister Virbhadra Singh is stable and there is no crisis of confidence, Health Minister Kaul Singh said on Friday.
Taking a jibe at the BJP in the assembly, he said: "The BJP is demoralised and disappointed. They are thinking that things may go like Arunachal Pradesh and Uttarakhand in Himachal Pradesh too.

"But we must tell them that the Congress is united under the leadership of Sonia Gandhi and Virbhadra Singh. We will take them (BJP) on unitedly," the minister said.

His assertions came after BJP members walked out of the house on the plea that the government on Thursday had accepted a cut motion on health, which meant that it did not have the right to stay in power. Kaul Singh said the Bharatiya Janata Party was talking about fresh assembly polls just to create confusion.

"The elections will be held at per schedule in 2017. And we will repeat our performance and the BJP will again stay in the opposition."

He said the BJP members were not aware of parliamentary practices.

"When we were in the opposition, we also used to raise issues. But we never disrupted the question hour like they are doing."

After the budget for 2016-17 was passed in the assembly on Thursday, opposition leader Prem Kumar Dhumal said the cut motions brought by the opposition were neither withdrawn nor rejected.

"Technically the government has fallen as it has lost majority and they have no right to continue," he told reporters here.

Two-time chief minister Dhumal has also said that Congress legislators were unhappy with the chief minister and were in touch with him (Dhumal), and an Uttarakhand-like situation can`t be ruled out in Himachal Pradesh.