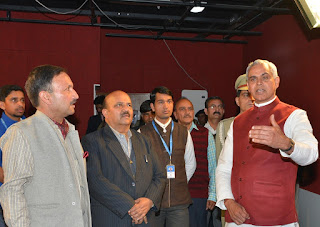 SHIMLA-----Governor Acharya Devvrat has urged the media to create awareness amongst the society for promoting organic farming, importance of cleanliness and ill effects of drugs besides highlightening social awareness campaigns like "Beti Bachao, Beti Padhao" programme and "Gau Palan" in the State.

The Governor was interacting with media persons at Shimla today. He said that these issues were of utmost priority and everybody should engage themselves in this mission for overall betterment of the society.

Acharya Devvrat expressed concern over the rising problem of drug abuse especially amongst the youth. He said the youth were future of any country and their energy needed to be channelised in a constructive manner for nation building.

He said that majority of population of the country was residing in villages , hence farming was an important vocation which should be strengthened to ensure economic growth of the country. He added that in order to ensure better health for all, it was essential to promote organic farming at large level and people should also be made aware about the benefits of organic food besides encouraging the farming community to practice it.

The Governor said that every citizen should be aware about his duty to keep the surroundings clean and stressed that cleanliness campaigns should be undertaken aggressively across the State. He said he would visit every educational institution of the Government in future to aware the students about the importance of various social awareness campaigns. He said that the students should take the responsibility of cleanliness so that others also follow them.

the birth of girl child and sensitize them about the importance of women in the society. He said such type of campaign should be made more effective and it should be launched vigorously in the State at all level.

The Governor lauded the role of media in upholding the rights of citizens and making them aware about it. He urged the media to take up social issues more effectively so that these could become mass campaign. He also called upon the media to support crusade against different social evils through awareness campaigns and also to participate in these campaigns as media had reach upto the remotest corner.