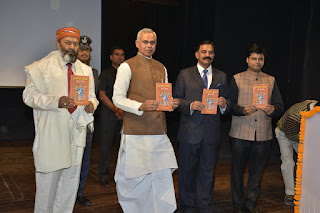 SHIMLA----There is not even a single character in the Ramayana which does not present an ideal for the society. Sri Rama was 'Maryadapurshotam' and a source of inspiration for the younger generation and we should draw inspiration from Ramayana for building a good society. This was stated by Governor Acharya Devvrat while releasing a book titled 'Bhagwan Sri Ram Ke 7 Roop', written by Maj.Gen. A.K. Shorie.

The Governor said that Sri Ram followed high principals and values, thereby becoming as ideal for the society. He set high standards as ideal son, brother, husband and king. His sacrifice and teaching are relevant event today.

Acharya Devvrat said that Sri Ram make sacrifice for the sack of promise made by King Dashrath to his wife and such rich traditions could be seen only in our country. He said that example of brotherhood and love towards brother could only be seen in our country.

Acharya Devvrat said that our country was of saints, sages and great souls. He said that this land was of Sri Ram and Sri Krishna. He said that all should draw inspiration from their teaching and ideals.

The Governor appreciated the efforts of the writer in depicting the character of Sri Ram. He said that all should draw inspiration from the teachings of Ramayana.

Maj. Gen. Shorie detailed various aspects of the book on the occasion.