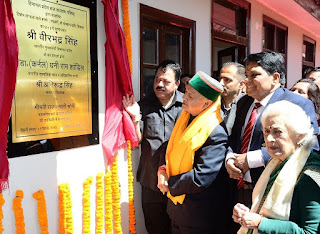 SHIMLA---Chief Minister Virbhadra Singh today said the old building of the orphanage home for specially-abled at Dhalli in Shimla would be reconstructed and provided with all basic facilities.

He inaugurated the new class rooms paving the way to start plus two classes for the children. The Nathpa Jhakri Power Corporation (NJPC) has offered to re-construct the complex which will have two common halls, a library, dormitories, play rooms etc. The Chief Minister said the state government would also contribute in providing various facilities in the complex.

The Chief Minister said that a sum of Rs. 10 crore was being spent for refurbishing the hostel for girls having capacity to house 150 girl students and a sum of Rs 4.50 crore for constructing boys hostel in special institute for specially abled children at Sundernagar, in district Mandi.

He said that apart from this, both residential and educational facilities were being provided to the children of orphanages at Dari, Sundernagar and Dhalli.

Sh. Virbhadra said that Dhalli and Sundernagar institutes for differently abled children had been upgraded to start plus two classes by filling adequate vacancies.

The Chief Minister announced Rs. 50,000 for the children of the Dhalli school.

Speaking on the occasion, Social Justice and Empowerment Minister, Dr. (Col.) Dhani Ram Shandil congratulated the Child Welfare Council for their efforts in getting the institute for specially disabled  upgraded to plus two level.

The Minister said that there were 1,55,316 differently abled children in the State. He said that a decision had been taken to provide residential facilities for as many as 50 mentally-challenged children in co-ordination with several NGOs. He said that blind children were being given an option to opt for any other optional subject instead of Maths and were also being given relaxation in entry fee for the eighth and tenth class examination.

General Secretary, Child welfare Council SMt Raj Kumari Soni detailed about the activities of the Council and thanked the Chief Minister for up-gradation of the Institute.