JEWELERS TO HANDOVER KEYS OF SHOPS TO FM TO LODGE PROTEST 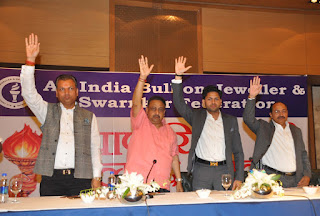 JEWELERS TO HANDOVER KEYS OF SHOPS TO FM TO LODGE PROTEST
INDEFINITE STRIKE WILL CONTINUE-PLEDGE BY 375 ASSOCIATIONS PAN INDIA
Vijyender Sharma
New Delhi-/ Shimla -----Jewelers on Friday decided to continue and intensify their pan-India strike for an indefinite period against the Budget proposal to impose 1 per cent excise duty, despite the Center's assurance of constituting a Committee to look into the procedural issues of excise implementation on jewelers.
" Nothing less than a complete roll back of excise duty levied on jewelers is acceptable to us "-said Mr. Praveen Goel, President of All India Bullion, Jewelers, Swarankar Federation (AIBJSF) which is spearheading the nationwide agitation​,​ at a day long meeting of the leaders of jewellery trade from all over India held today at New Delhi. The Confederation of All India Traders (CAIT), apex body of trading community is already supporting the jewelers > CAIT has urged the Government to initiate process of dialogue with protesting traders to end the logjam.​
Representatives of more than 375 Jewellery trade Associations  including manufacturers, retailers, artisans, converters, designers and others from different States of the Country attended the meeting and unanimously decided to intensify the strike till we get the announcement of roll back-said Yogesh Singhal, General Secretary, AIBJSF.
Both Mr. Goel & Mr. Singhal announced a ​series of ​week long protest program  to be ​staged​ uniformly at same time by jewellery traders across the Country. Beginning next week from Monday, the ​series of ​protest program include handing over keys of shops to Finance Minister, blowing whistle in front of buffalo, ringing bells at District Headquarters, gherao of MPs & presentation of memorandum,  forming of Human Chain and transfer of registration papers of shops in the name of Finance Minister. Both leaders will announce dates of these programs on Saturday. Protest programs for week beginning  4th April are being chalked out by AIBJSF.
Over three lakh jewelers and artisans are participating in the strike since March 2 all over the Country. Jewellery industry in India is estimated at about Rs. 3.15 lakh crore which is likely to grow to Rs. 5 lakh crore by 2018.
The Union Budget had imposed an excise duty of one per cent on gems and jewellery sector without input credit and 12.5 per cent with input credit. The industry claims that it cannot comply with the due diligence and requirements as proposed under the Excise Act as the manufacturers, artisans and other verticals of jewellery trade  are in no position to follow up with even the minimum provisions applicable.
The retail jewellery sector is apprehensive to be known as manufacturers and register for excise. This will lead to confusion and chaos, leading to large-scale of discrimination among​s​t various sectors that will result in unemployment in this industry, said​ both leaders.