ED attached worth 8 crore of assets to Virbhadra Singh 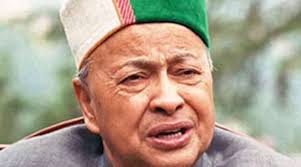 SHIMLA/New Delhi: Enforcement directorate have attached Rs. 8 crore of assets to Himachal Pradesh Chief Minister Virbhadra Singh in the money laundering case against him. Enforcement directorate clearly stated that the accused beneficiary cannot take any further advantage by laundering money.Mr. Singh defending himself said it is a political witch hunt against him. A week ago, the Delhi High Court had refused to grant a stay on the money laundering proceedings initiated by the Enforcement Directorate against Mr Virbhadra Singh. He had appealed to the court to stay the proceedings and also quash the case. The court had asked the ED to respond by May 31. The case was registered last year on a complaint by the Central Bureau of Investigation which was investigating a corruption case against Mr. Singh. The agency is investigating charges against Mr Singh and his family, alleging that it was more than what they could have earned from their known sources of income when he was Union Minister of Steel in the UPA government. The CBI had lodged a case under the Prevention of Corruption Act, naming Mr Singh, his wife Pratibha Singh, LIC agent Anand Chauhan and Chunni Lal Chauhan in September 2015. Earlier, the CBI had initiated raid at multiple locations. Later, the ED conducted raids and summoned Mr Singh for questioning in Delhi after the registration of the case under the Prevention of Money Laundering Act.